Disclaimer: I got new lights for photography! Thanks to Morgenroete Munitions' project (unrelated to gunpla), I now have a pair of spare 2ft T5 fluorescent tube housings at my disposal. Though I welcome bright even lighting that is not fixed to the ceiling, I am still trying to figure out the best way to utilize these lights. If any of the photographs feel off, please let me know. Thanks!

Preamble
Ever since my impulse purchase of the HG IBO Graze (outlined/explained in the Quick Review), I have been keeping an eye on the kits and imagining what I could do to customize one of these Post Disaster mobile suits. I purchased a few of the Iron-Blooded Arms expansion kits, but nothing really inspired me to make a custom suit using the parts from the Graze or the IBA kits. Enter the Grimgerde. Though I am not a big fan of the accessories, I am a big fan of the suit proportions, unlike the Graze. Seeing some of the custom work online has inspired me to think about what I could do with this suit.
I purchased this kit from the store where I purchased my first Gunpla, Cape Cod Collectibles (formerly known as Hidden Hobbies and Hoagie's Hobbies prior). After some internal changes to the store, I was unable to purchase Gunpla in this location for a few years. I talked to the owner of the store in the Spring and he said he was lining stuff to up start bringing in Gunpla to the store through his distributor. Unfortunately, due to some miscommunication with the distributor, the Grimgerde I asked for did not come in until mid-June, almost two months after I asked for the kit. That was about the time I started my new job, so I was unable to build it in the timeline I was hoping for.
It took me all summer (and a few distractions) to find the time to build this one.

Background
Not much information about the Grimgerde is revealed in the anime (then again, not much information is given about any mobile suit in the anime). I read on Wikia (thanks for the research, internet) that there are supposedly less than 10 of these suits produced and was made around the same time as the Gundam frame. I guess that's a cool story.

Origin aside, the suit is piloted by another masked man of conflicted agendas. Is it a coincidence the suit he pilots is red? TV Tropes tells me there is no such thing.

Thoughts
Going back to HG IBO after building kits from HG AGE and HGUC, I find Bandai continues to spoil its consumers with even easier to build kits with the HG IBO line. With an inner frame made of a slightly softer plastic, less care needs to be taken on cutting out the pieces. The harder exterior armor is minimal but covers the seam lines in the inner frame. Therefore, the kits can be whipped up with ease without too much work on cleaning up the gate marks and nubs. It's engineering genius on Bandai's part. This brings up a trivial question: what came first, the suit or the show? Typically, we think the show was written to make toys, but what if Bandai made the toys and asked Sunrise Inc to create a show based on the mechs they wanted to sell (or at least the engineering technology behind the toys)? Whatever they're doing at Bandai, it's working. 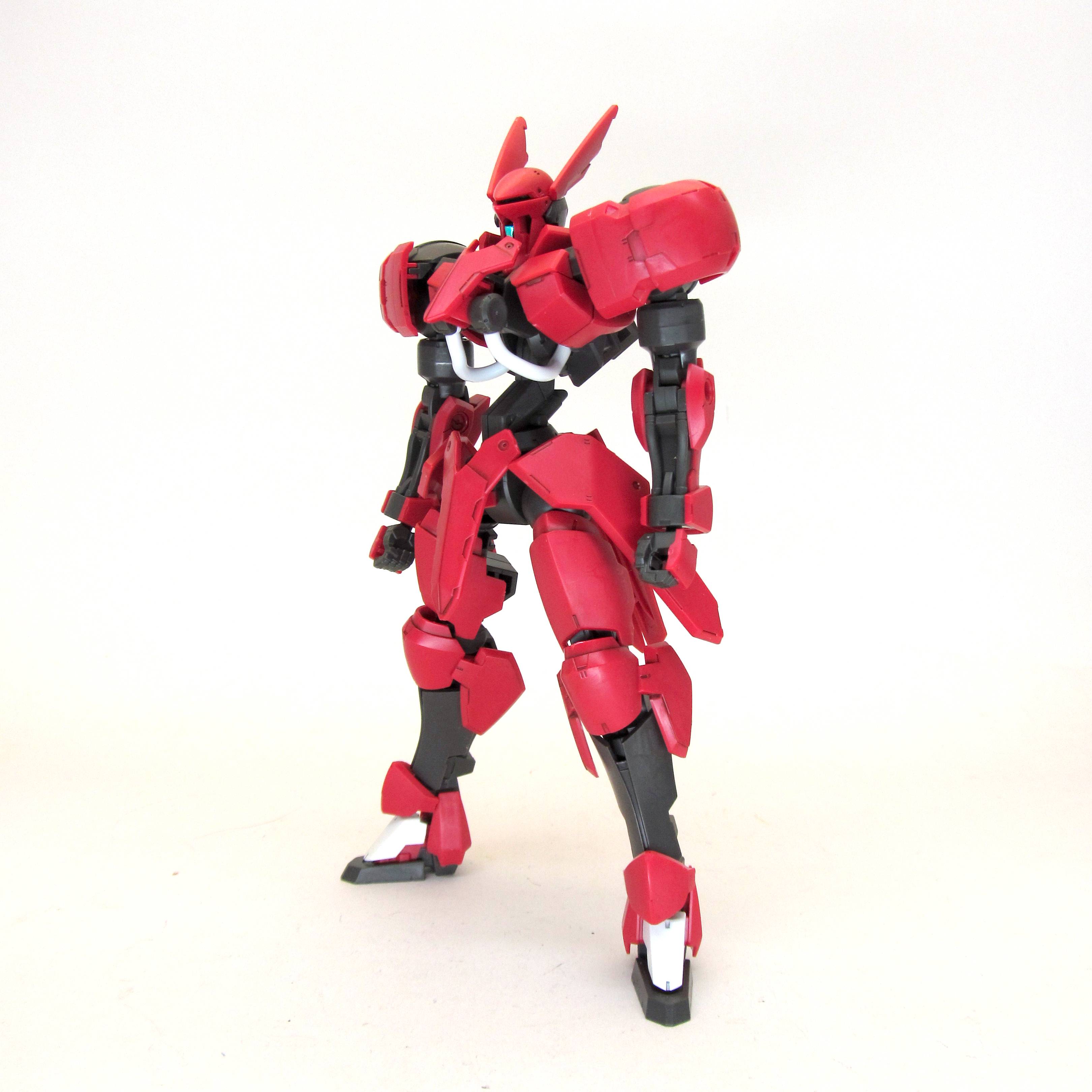 Tangent aside, the Grimgerde looks stunning! From the winged graze-like head to the accents of white on the feet and chest, this kit boasts a sleek style paired with power (in the broad shoulders). The part I like the most is the whole back-side - the various exposed fins and pipes piques my interest in painting in the details, and the fact that there is articulation in the vents on each side of the generator makes for some potentially great (but subtle) posing. 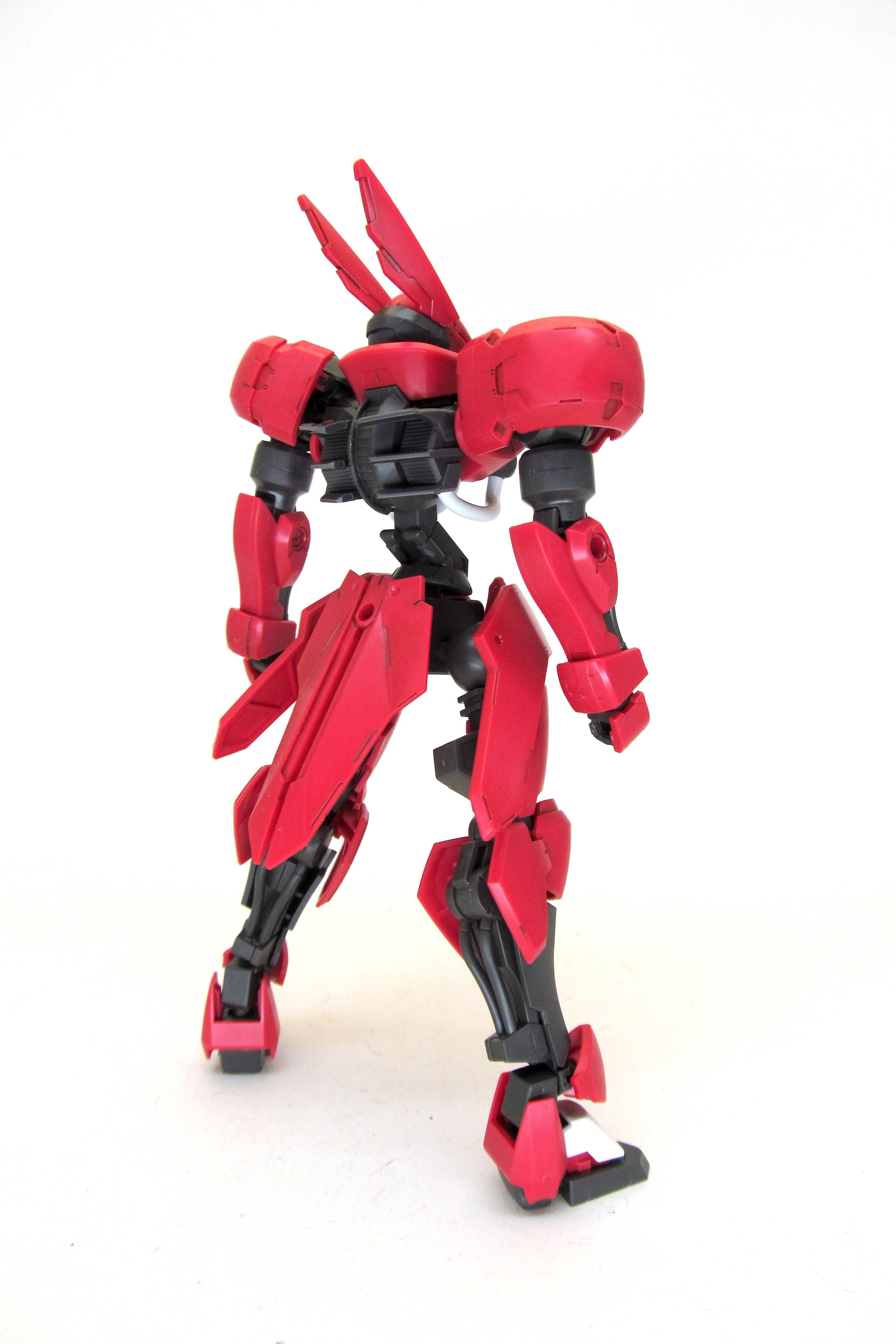 Along with it's dashing looks, the Grimgerde has a few accessories, some which I can live without: Twin shield and sword combinations, and a rifle. The rifle is seems somewhat standard, though the long barrel pairs up nicely with the sleek Valkyrja frame. The fact that the (assumed) ammo drum has two different positions, one to stow on the rear skirt armor, makes for a decent weapon. The twin shields and swords, however, fall short. 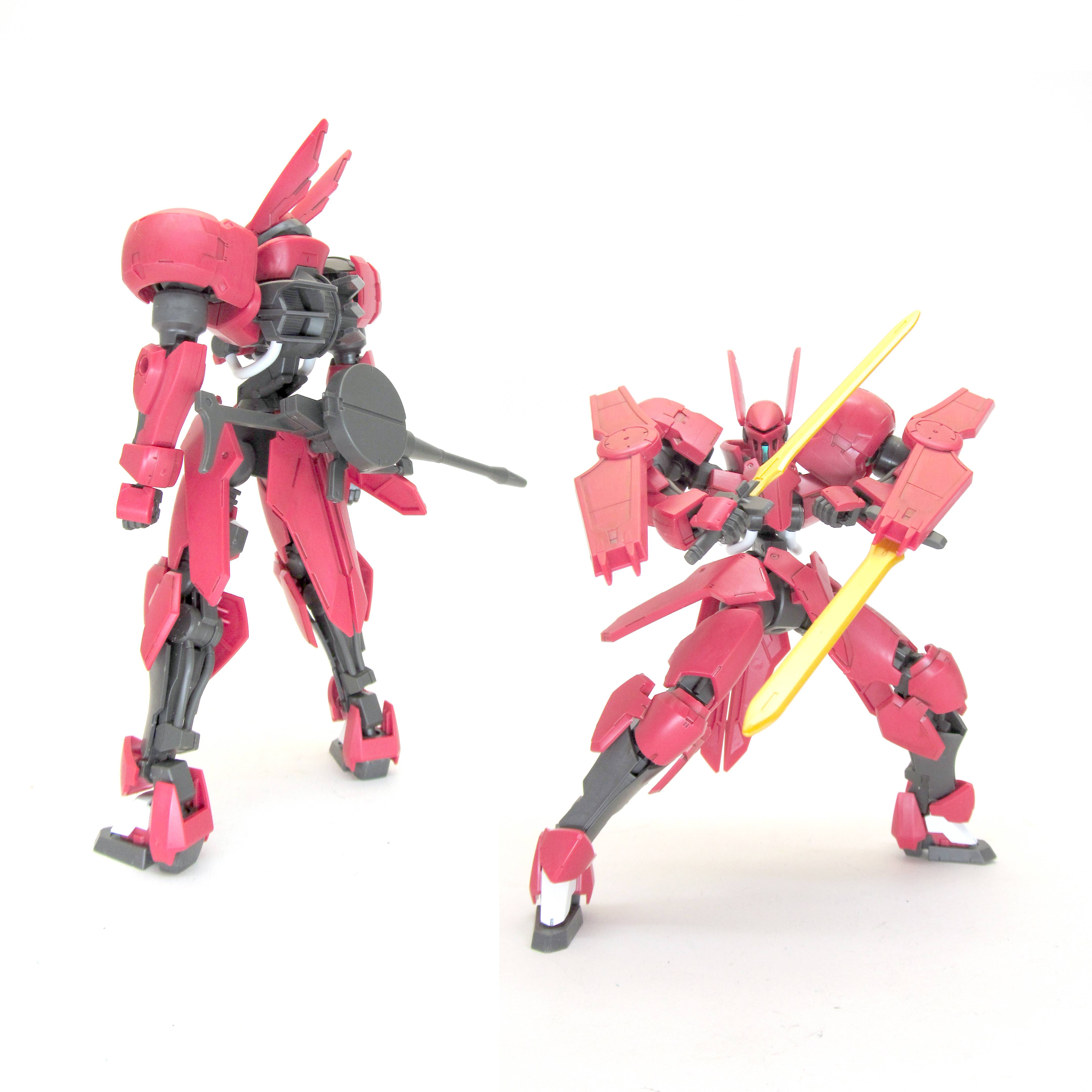 Overall, like most recent HG kits, the build quality is great, the color separation is great, and if you like the suit either because you saw it in action in the anime or because you just like its looks, then throw some money down on it. These IBO kits are quite cheap!

BONUS: 1/100 Comparison
In this quick review, I was given the chance to compare my kit with the 1/100 scale version provided by my friend, Sandrock (for comparison purposes only). Here are a few thoughts on each when compared side-by-side. 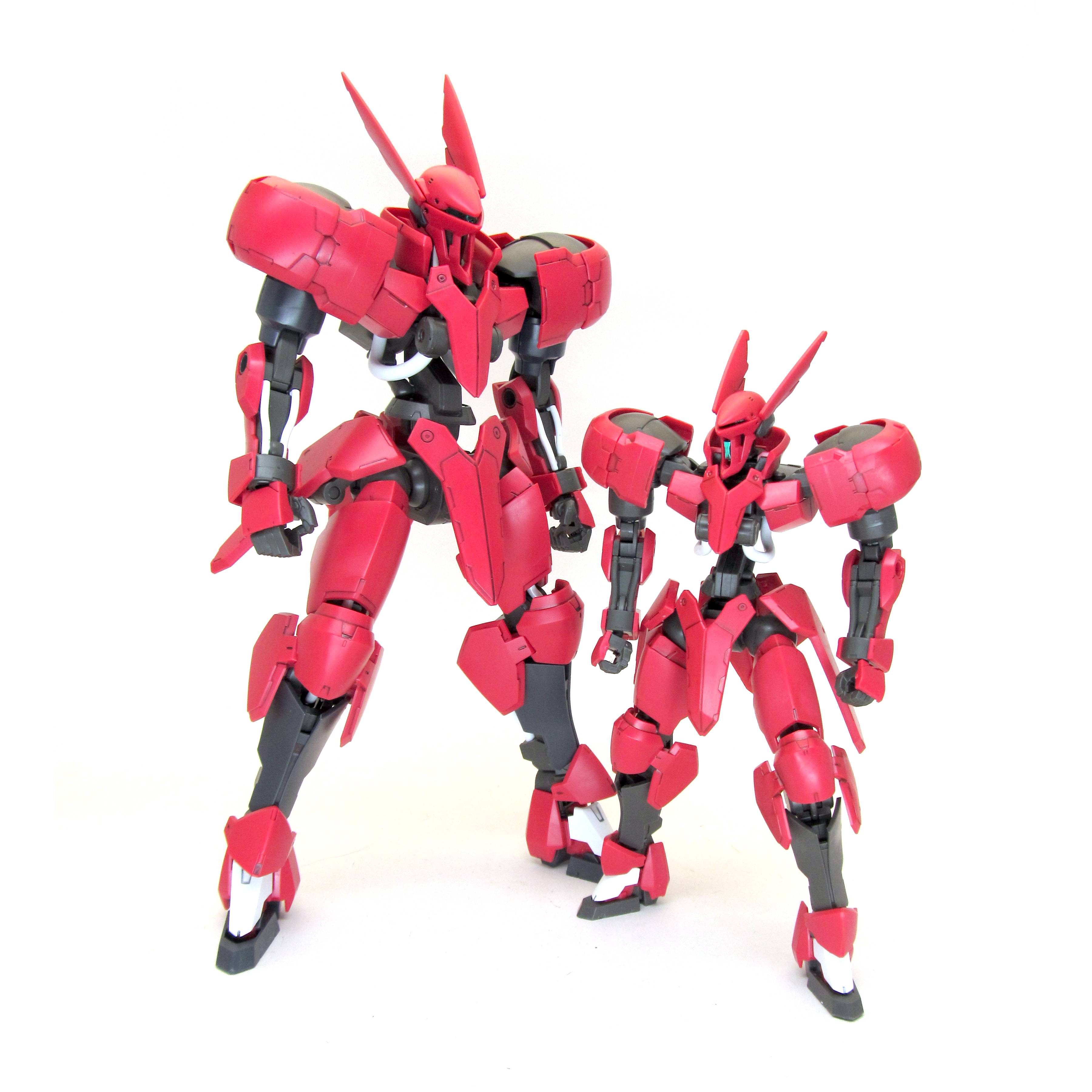 The 1/100 scale version, in many regards, feels like merely a scaled up version of the HG version - what I mean is the suit does not feel sleeker with sharper edges and stronger curves. Rather, the suit just feels bigger. There is nothing wrong with this, however in my mind, I compare to Master Grades and I just want the Grimgerde to have that sort of sharp look other grades have in its scale.

...or maybe I'm just crazy and the body proportions are perfectly fine.

Personal preferences aside, one issue come up when playing around with the kit: the shoulders. These massive armor chunks tend to fall off when moving the arm around. Compared to the 1/144 scale version, these shoulders are quite prone to pop off, and quite easily. Just trying to put the suit in a decent pose would cause the shoulders to fall off. 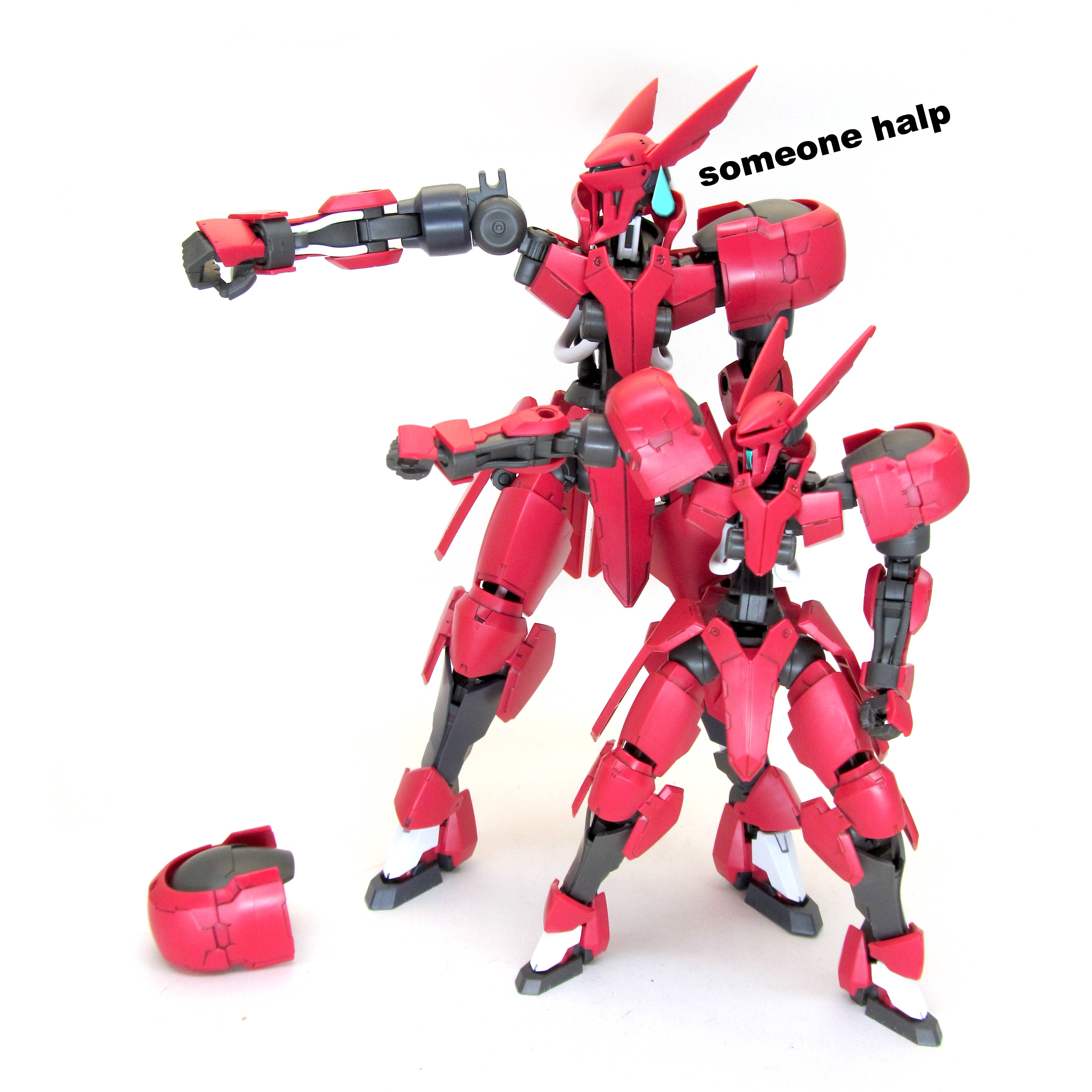 Most everything else about the kit is great: The additional joints in the shield for the sword mounts, the joint in the ammo drum, and the extra color separation and line detail. However, one part really bothered me: the rifle. While scaling the kit up, for one reason or another the designers at Bandai decided it would be best if the rifle was not as long. 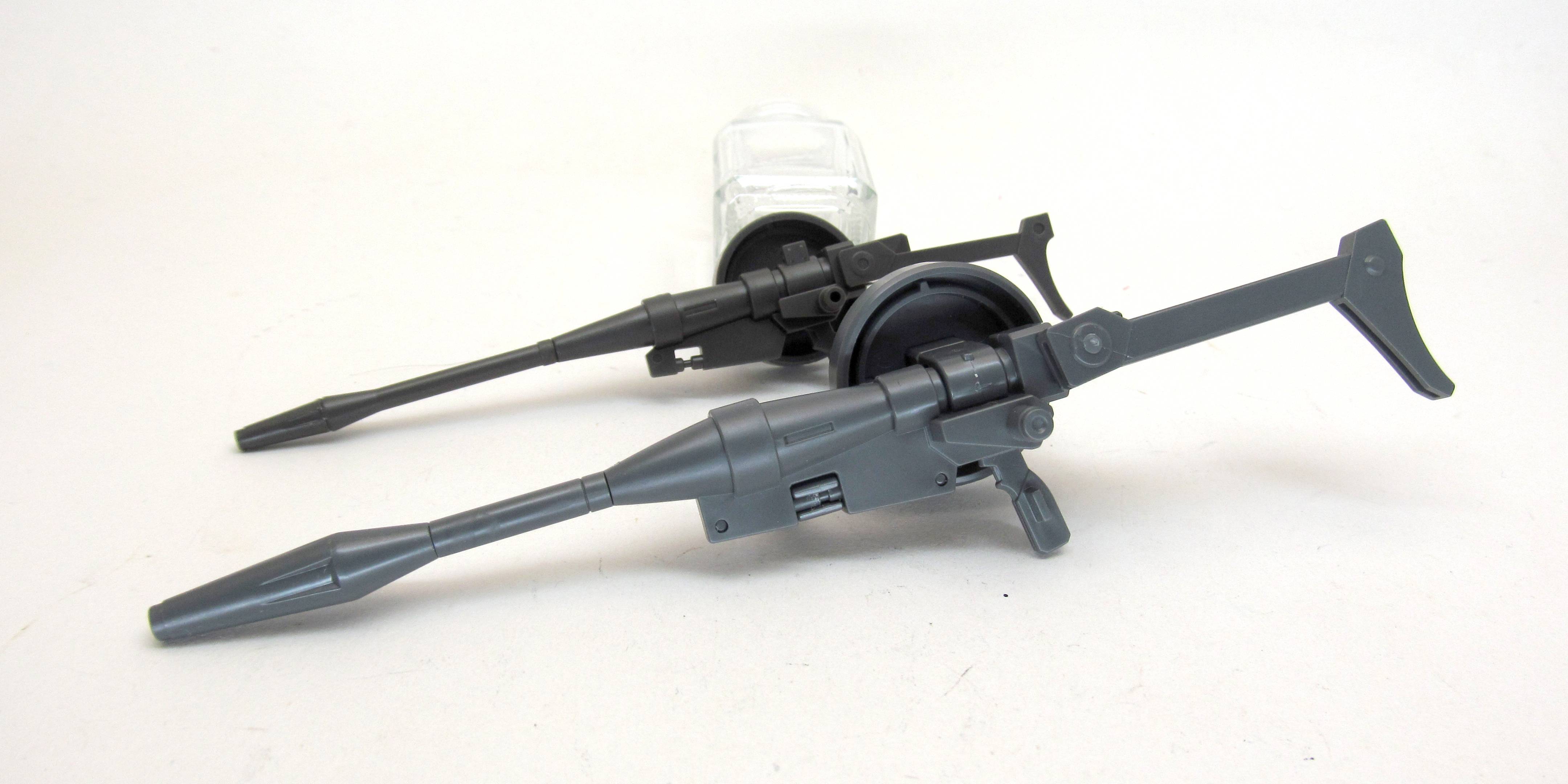 Because of this, the rifle does not match the Grimgerde as well as the 1/144 scale version. To me, combined with the shoulder issue, steers me far away from considering the 1/100 scale Grimgerde.

In it's straight build form, these two kits both have the advantages and disadvantages. I think I would have been happy with either version, though the 1/144 scale seems to be slightly better in my perspective purely because of its rifle. Either way, both Sandrock and I have plans to customize these kits, replacing the accessories we do not prefer with something else. Maybe we'll bring them back together for a Grimgerde Kai showcase (on Instagram). I'd tell you to stay tuned and look forward to it, but seeing as I can't even finish the MG RX-78-02 quick review in a timely manner, it might be best not to ask that of you. I hope you enjoyed this quick review and 1/100 comparison. See you in the next!

PS: Thanks for making your way to the end. If you haven't seen yet, I am hosting a small contest & giveaway! Please check out the page "100kTY" located on the top navigation bar of this blog. I look forward to seeing your creativity (or just seeing your name on the list)!
Posted by Unknown at 6:03 PM