Disclaimer: I got new lights for photography! Thanks to Morgenroete Munitions' project (unrelated to gunpla), I now have a pair of spare 2ft T5 fluorescent tube housings at my disposal. Though I welcome bright even lighting that is not fixed to the ceiling, I know the following photo set is quite washed out, I am still trying to figure out the best way to utilize these lights. Please bear with me!

Preamble
Over the summer, I wanted to participate in Bandai's 2016 Mid-Year Campaign with the chance to win the HGBF Neon Beargguy 3000. To enter, I followed the same procedure as I did with the 2016 New Year Campaign: Orchestrate a group purchase with friends using Model Grade. Though their free shipping parameters are harder to achieve, they are liberal on Campaign ticket distribution (unlike some companies).
Though our group of friends ended up with no Beargguy 3000 (or any other prizes), Model Grade had a 50% price cut on all Gundam G no Reconguista kits at the time. My purchase of the G-Lucifer and Space Backpack at half price made me feel like a winner.

Background
For an unpopular show, Tomino and gang spent quite a bit of time on some of the suit's backstories. The G-Lucifer is one of those suits. It is a peculiar suit from the G-IT Laboratory that is quickly comandeered by Manny and Noredo.

The Laboratory designed this suit specifically to wield the skirt funnels - massive detachable beam weapons that can be controlled remotely. It is quite a shame that this suit, along with many others introduced in the latter half of Gundam G no Reconguista, will probably never see any more action.

Thoughts
Starting the build, the first amazing design choice is the head: the mono-eye is a separate piece of plastic instead of a pink sticker! I know of few HG kits (probably none) that would have this. For that small piece of pink plastic, this kit is already looks promising! 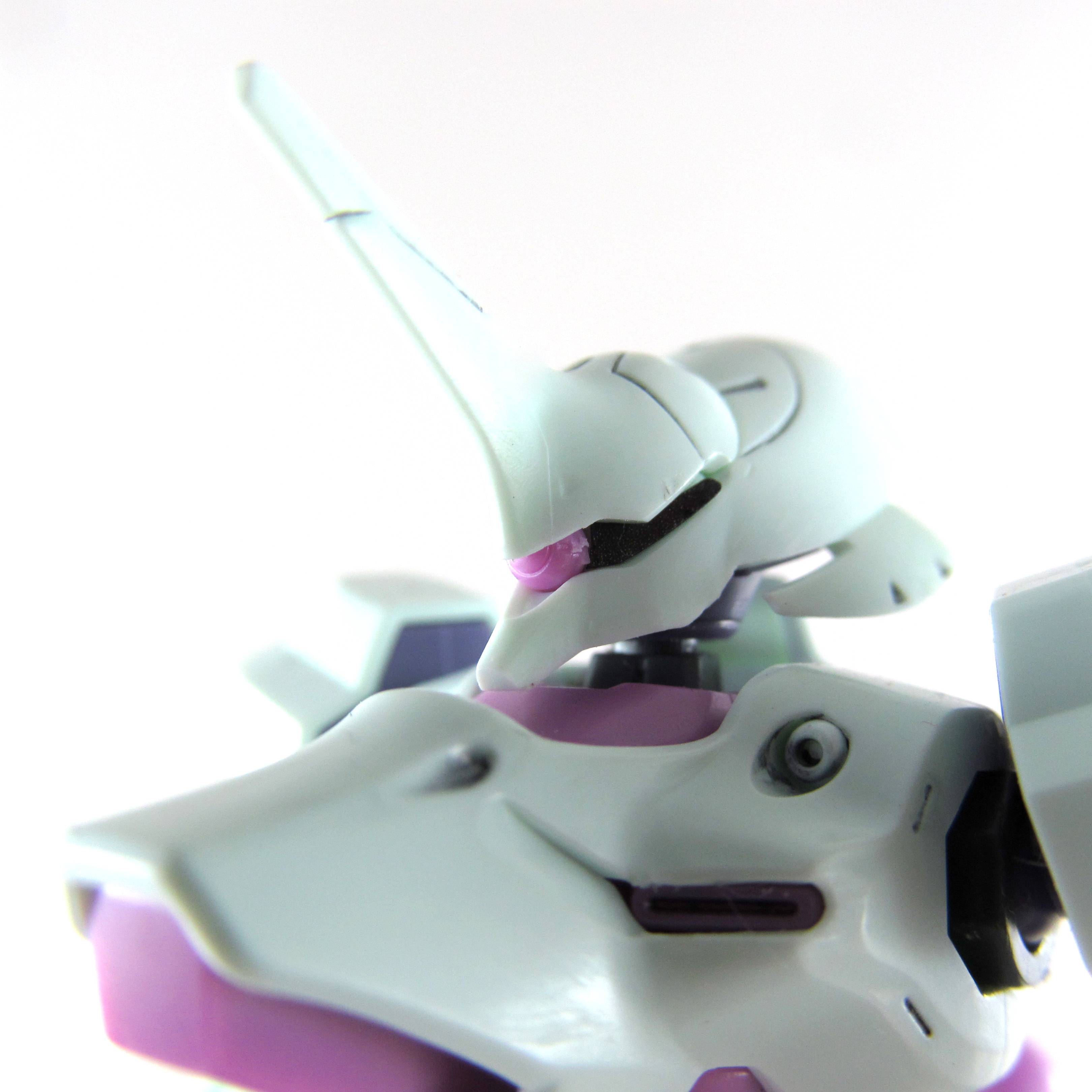 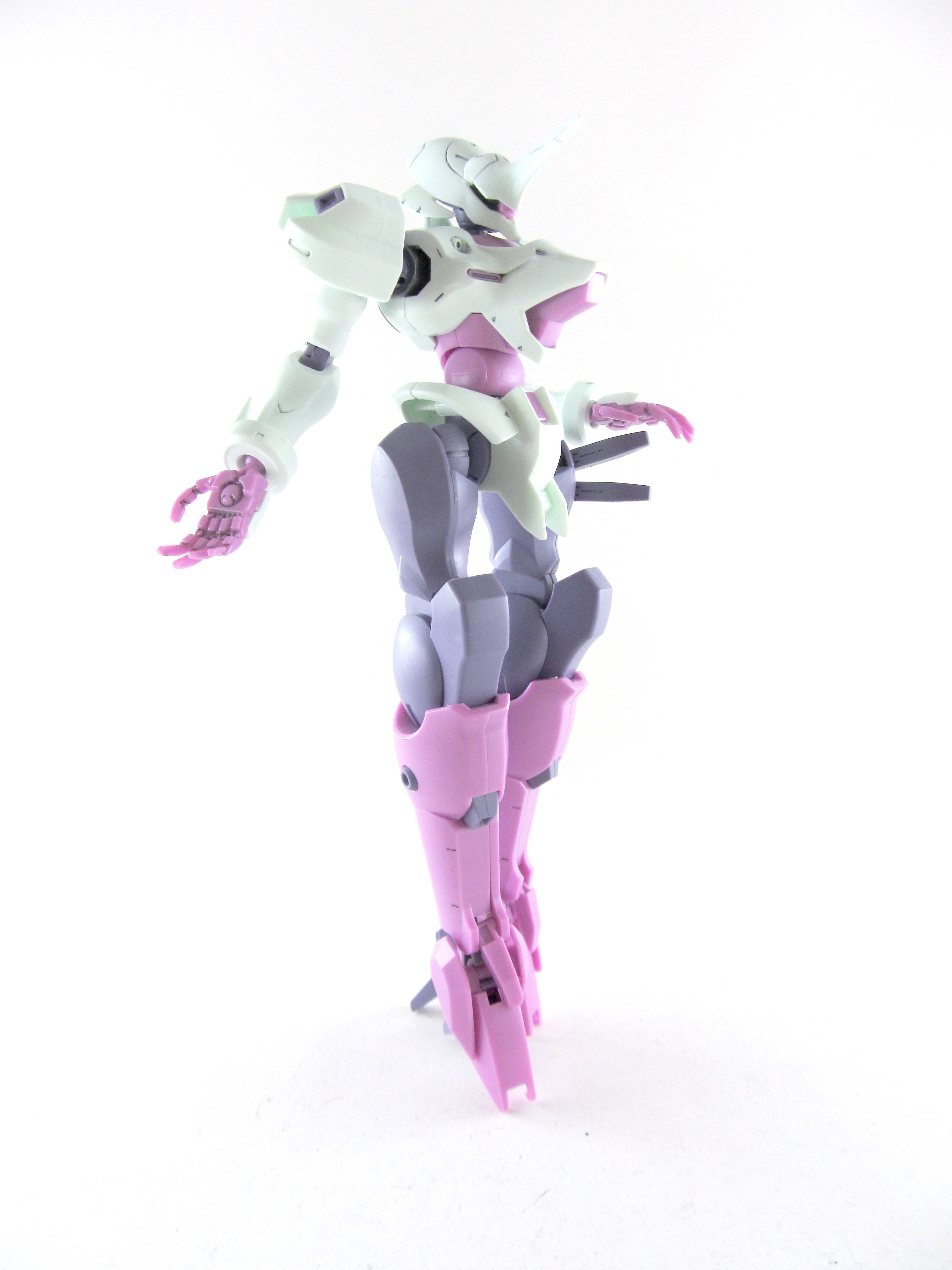 On top of the color separation, this suit is considered one of the few suits with a feminine body shape. I do not know how I feel about the current pool of feminine mobile suits, but this one is definitely catches my eye over many of the previous suits, especially with the skirt funnels. 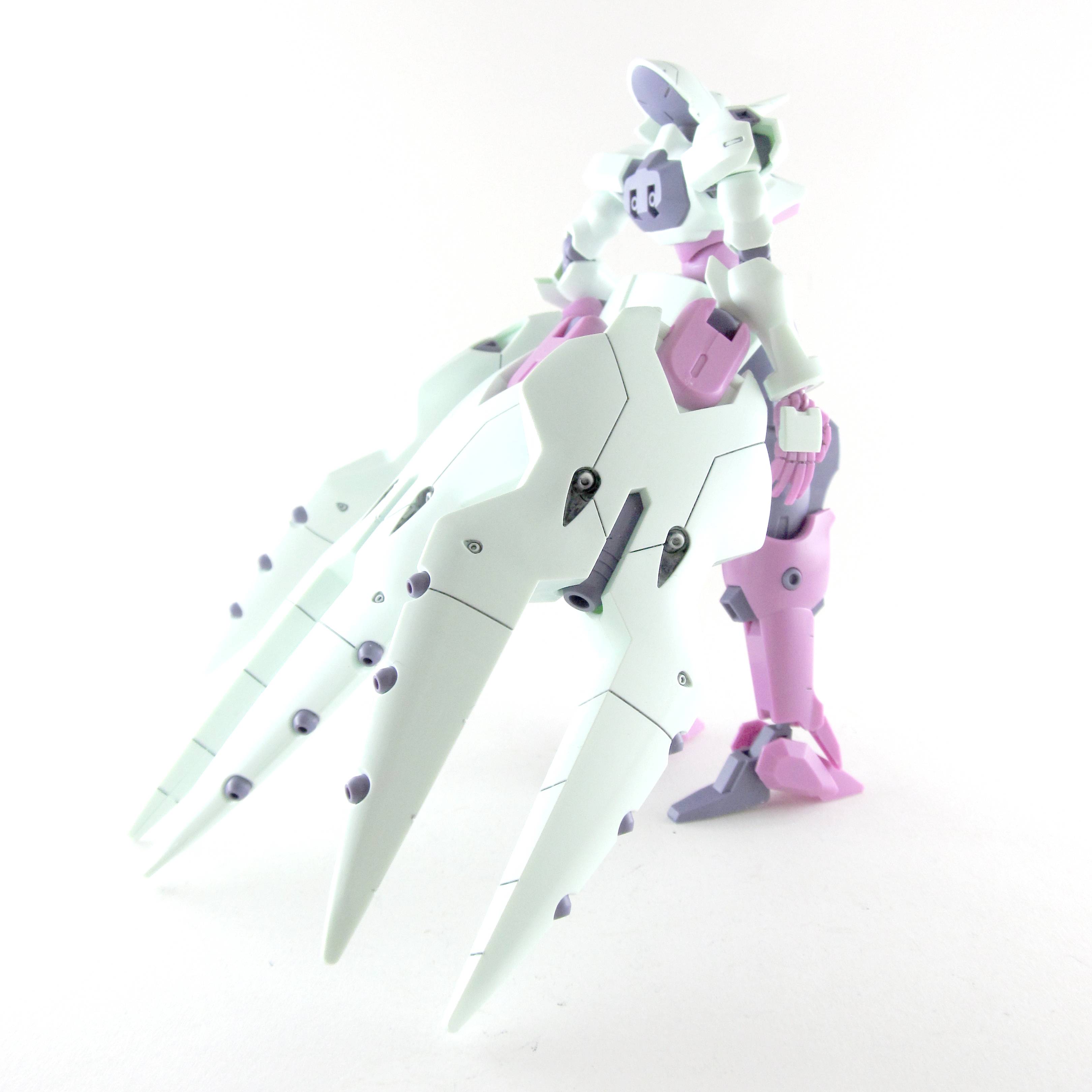 Because the suit's focus is those skirt funnels, the kit does not include conventional weapons, which may be a problem for some. For me, however, I could care less for G Reco rifles: they're generally generic and altogether lame. Instead, the kit includes some large effects parts and stands. 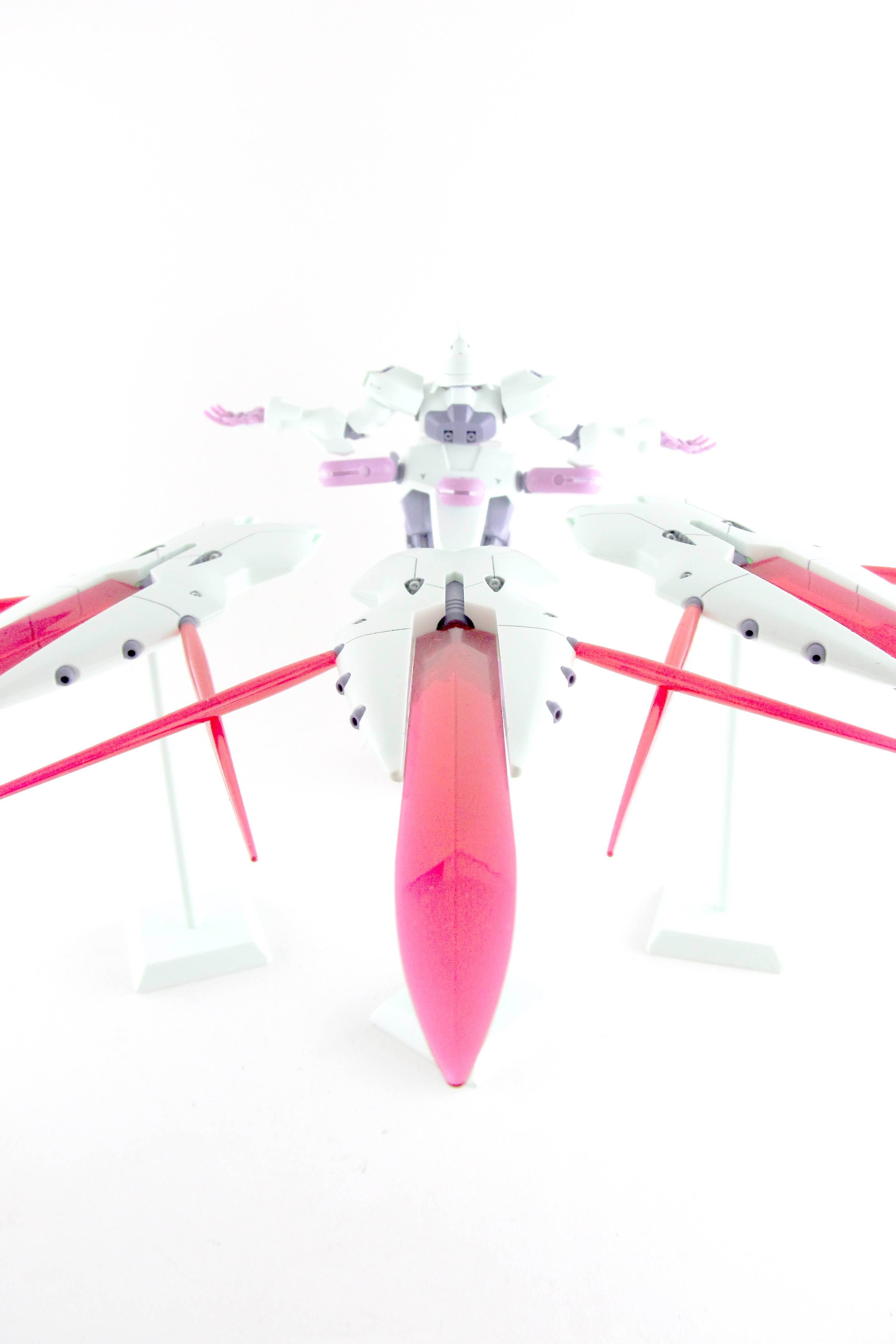 Despite not having a conventional rifle, the G-Lucifer still has beam sabers. The interesting part about these sabers are how they're held - on the left hip. Unfortunately, because of their awkward position, they also happen to be pretty loose. 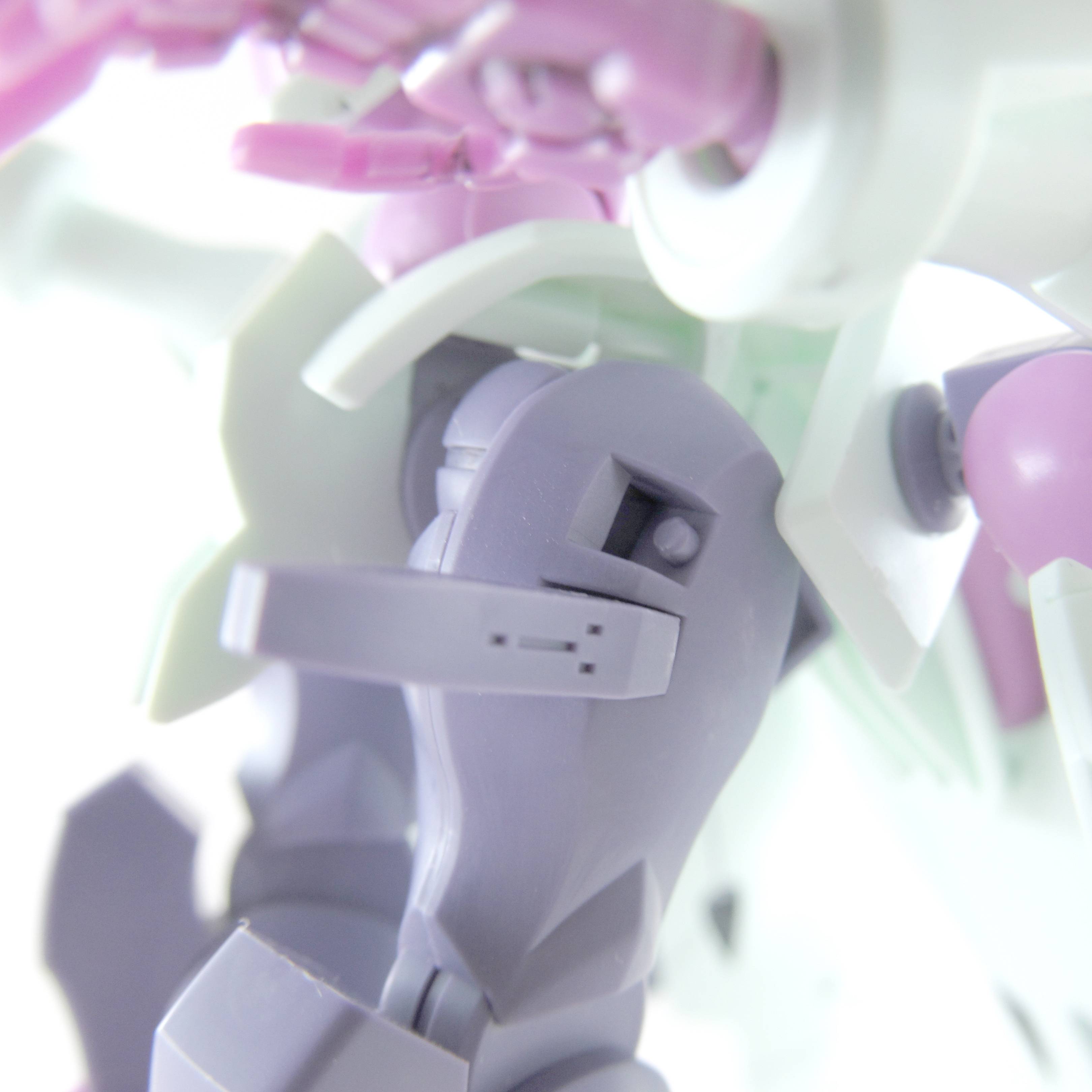 A major flaw in G-Lucifer's design resides with the arms. Despite having a slot in the shoulder that may suggest a high range of motion, the plastic of the upper arm restricts movement of the shoulder joints by a significant amount. Pair up with the fact that the joining joint to the torso is loose, the arms tend to fall off while attempting to pose the suit - it's range of motion is pretty bad.
The other issue I found was the feet. Because they are designed to fold up, they do not hold up the rest of the suit as easily as conventional suits do. It is a minor issue since the kit includes a stand for the suit, but it is something that may cause concern for someone looking to display the G-Lucifer standing.

Despite having some flaws, the suit can look stunning right out of the box (especially with the included stands). Personally I was hesitant to purchase any more kits from the HG G no Reconguista line because of how poorly designed the G-Self was. However, the G-Lucifer seems to be a better design all around, and for that I am happy to say I would suggest this kit to anyone looking for a unique design.
Posted by Unknown at 3:19 PM