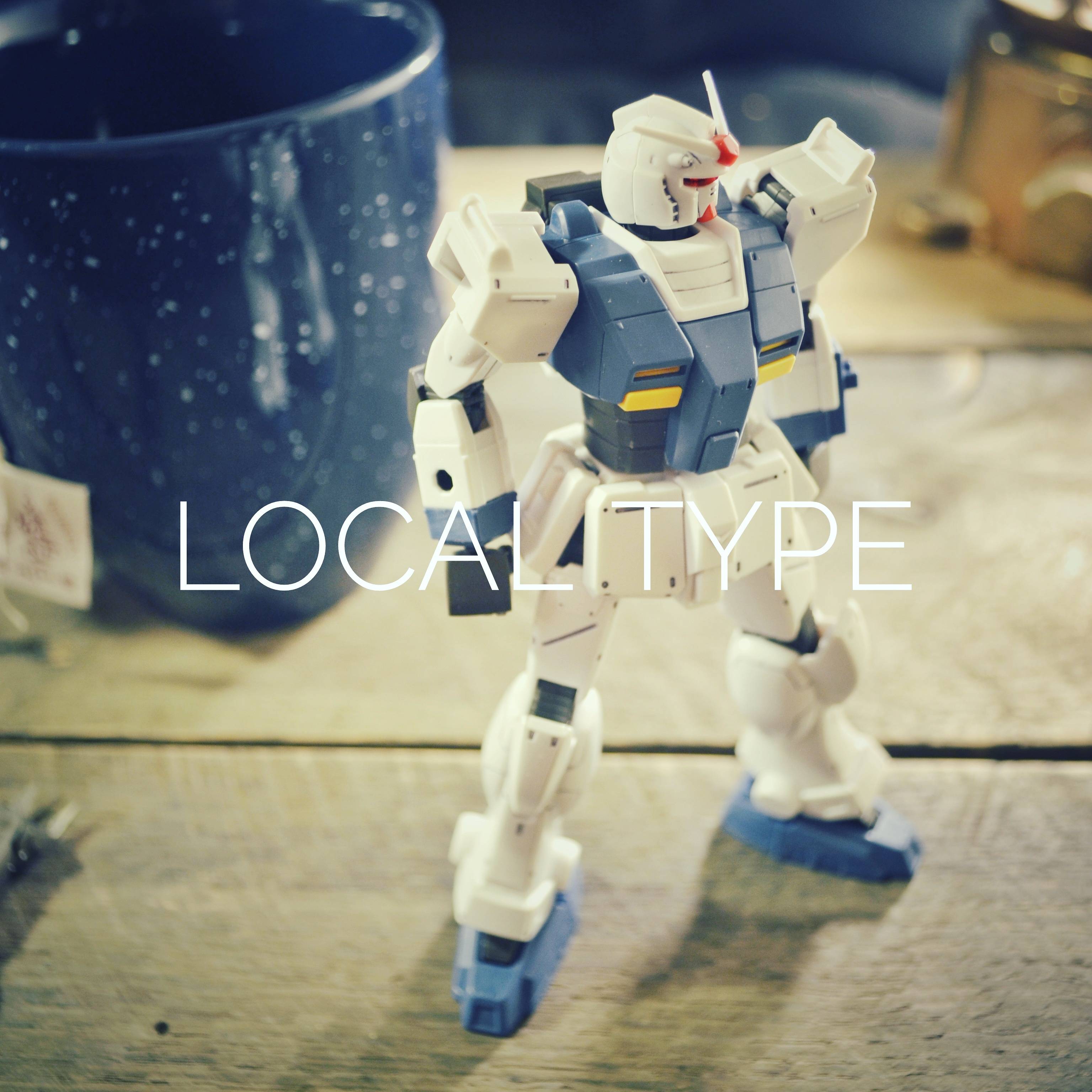 Preamble
As my friend was on his way back from Hong Kong, he asked me if I wanted anything from that fragrant harbor. I told him I wanted nothing more than the local flavor of Gunpla. He, the Pokémon fan that he is, did not know where to begin. Fortunately, with a little street smarts from his cousin, my friend was able to pick up something...local.
Driving said friend from the airport, I immediately got my hands on this kit. If I put the kit together within that week, it would have been the fastest turnout for me from kit release day to assembled kit. Unfortunately, I got hung up on other responsibilities and ended up building nothing. At least I found the time now!

Background
Gundam Local Type comes from Mobile Suit Gundam: The Origin's Mobile Suit Discovery, a collection of mobile suits you probably haven't heard of. Similar to past Mobile Suit Variations, MSD serves to tell the expanded story of Mobile Suit Gundam: The Origin through mobile suits that would have existed in the same timeline. In the case of Local Type, it was the predecessor to multiple suits such as Aqua GM, Underwater Gundam, and Gundam Ground Type. Please refer to the flowchart below for exactly how they're related.

Basically, Local Type is Ground Type before it was cool mass produced for the One Year War. At least that is what Sunrise/Bandai want us to believe in the new interpretation of the story.

Thoughts
As a fan of the Ground Type Gundam, there are aspects of this pseudo-predecessor I find interesting while also finding aspects I despise. If I were to choose between MSD and 08th MS Team mobile suit designs, I would, without a doubt fall back on the 1996 mobile suit designs. Obviously there is quite a bit of bias between growing up in the 90s and being a fan of the OVA. Nevertheless, the Local Type has its merits. 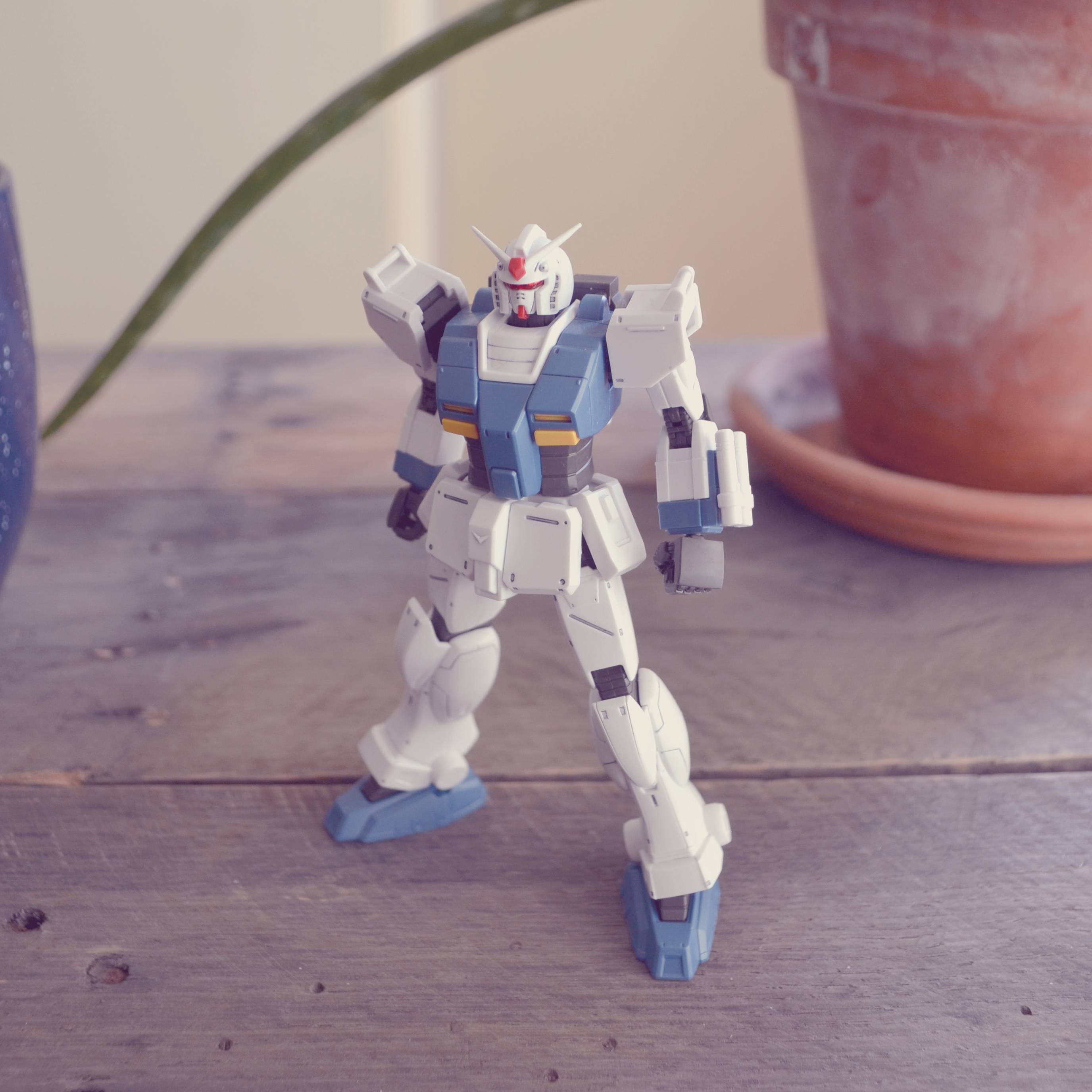 One of the biggest improvements from its 08th MS Team counterparts is the articulation. Though the HGUC kits were okay, they definitely had their limitations in poses and sturdiness. The Local Type has many of the issues engineered out specifically in the shoulders and the ankles. Unfortunately, the ankles are not perfect - the guards are molded into the legs. While Gound Type and all the GM variants typically have a hinged ankle guard, this design keeps the guards static with the rest of the leg. Maybe this is the largest non-issue, but for me, the ankles do not look right when they are always in the "up" position.

Aesthetically, I am quite happy with most of the design decisions. The white and blue with the hint of yellow reminds me of the Patlabor color scheme. The fact that this suit is considered the "Local Type" furthers the idea that these suits were used as domestic forces. All I need now are EFPD decals (Earth Federation Police Department?)
The overly white sections of the suit are broken up with line details and accent colors via stickers. These clear stickers, seem to be one of the defining features of this line of kits. Like Real Grades and Ver. Ka kits, HG The Origin will seem to always have a decal set to further enhance the kit. I personally do not like the idea of using these stickers, however, these clear stickers seem to do the job. I just wish Bandai either included water slide decals or sold them separately. It would be nice to have the option. 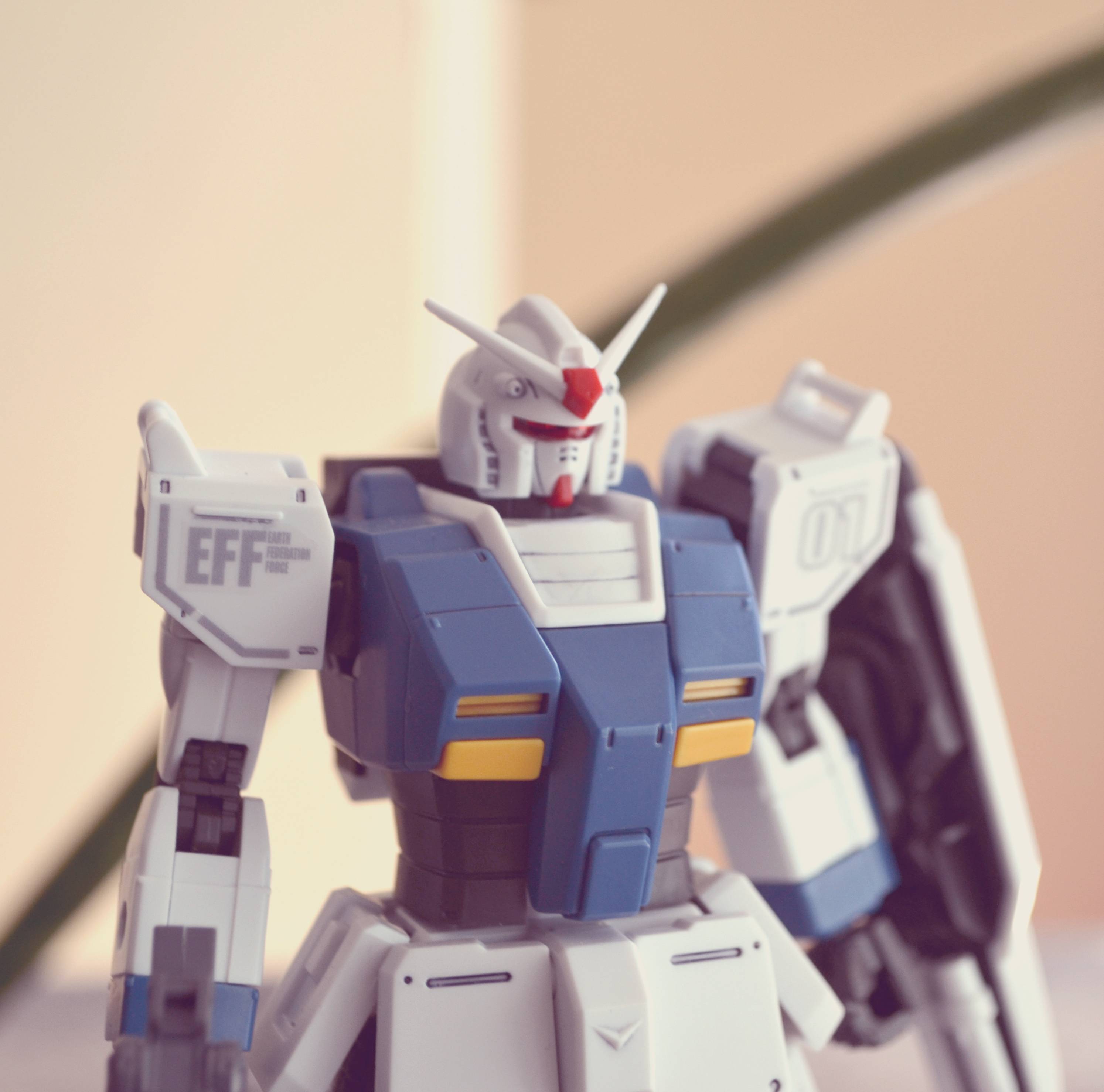 The accessories included with this kit are a re-imagined 100mm Machine Gun, a Federation Small Shield, and a pair of beam sabers. These two modern interpretations of the standard ground war equipment give a fresh look while maintaining their old roots. The beam sabers can be mounted directly on the arm or at the tip of the shield. Nothing too fantastic in those designs. 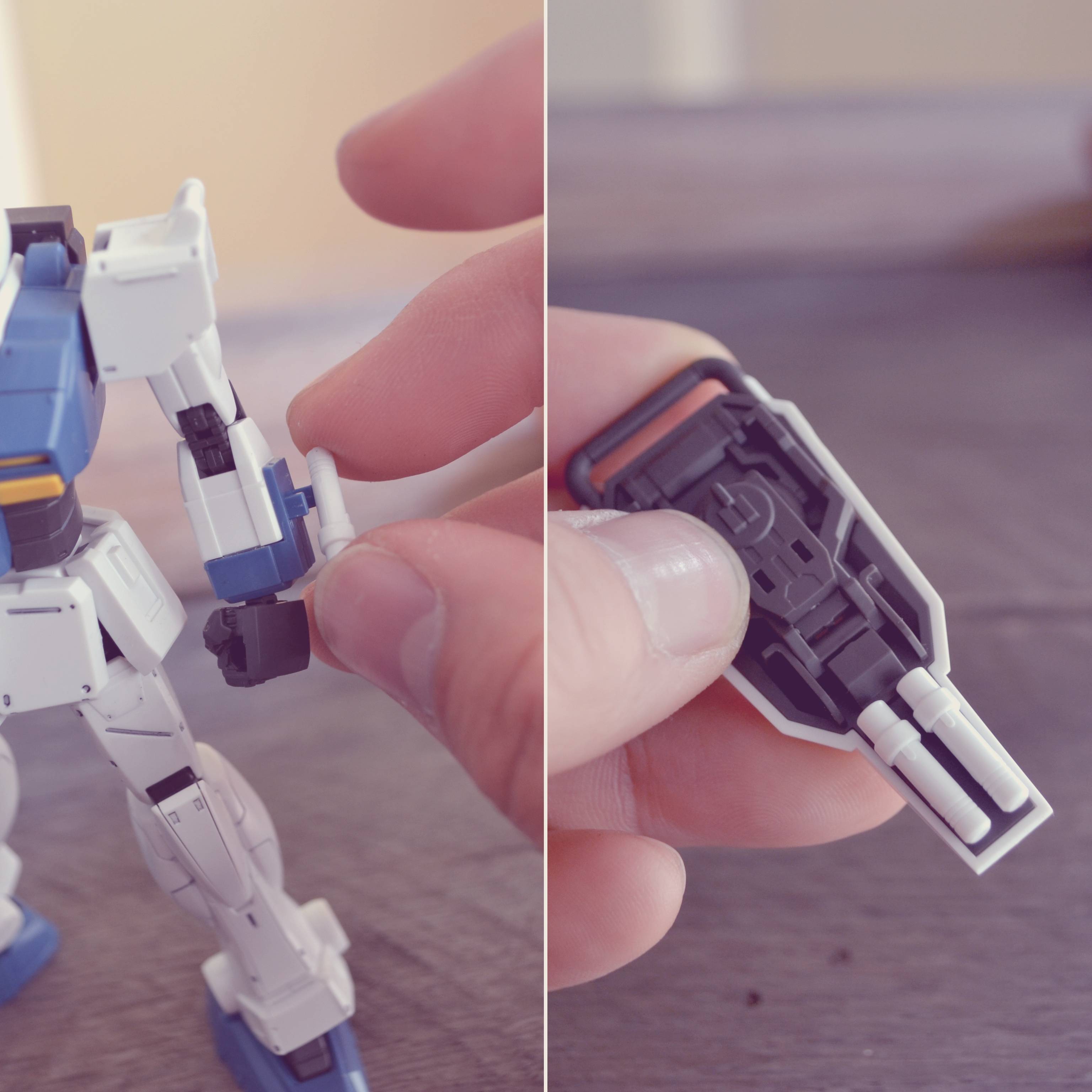 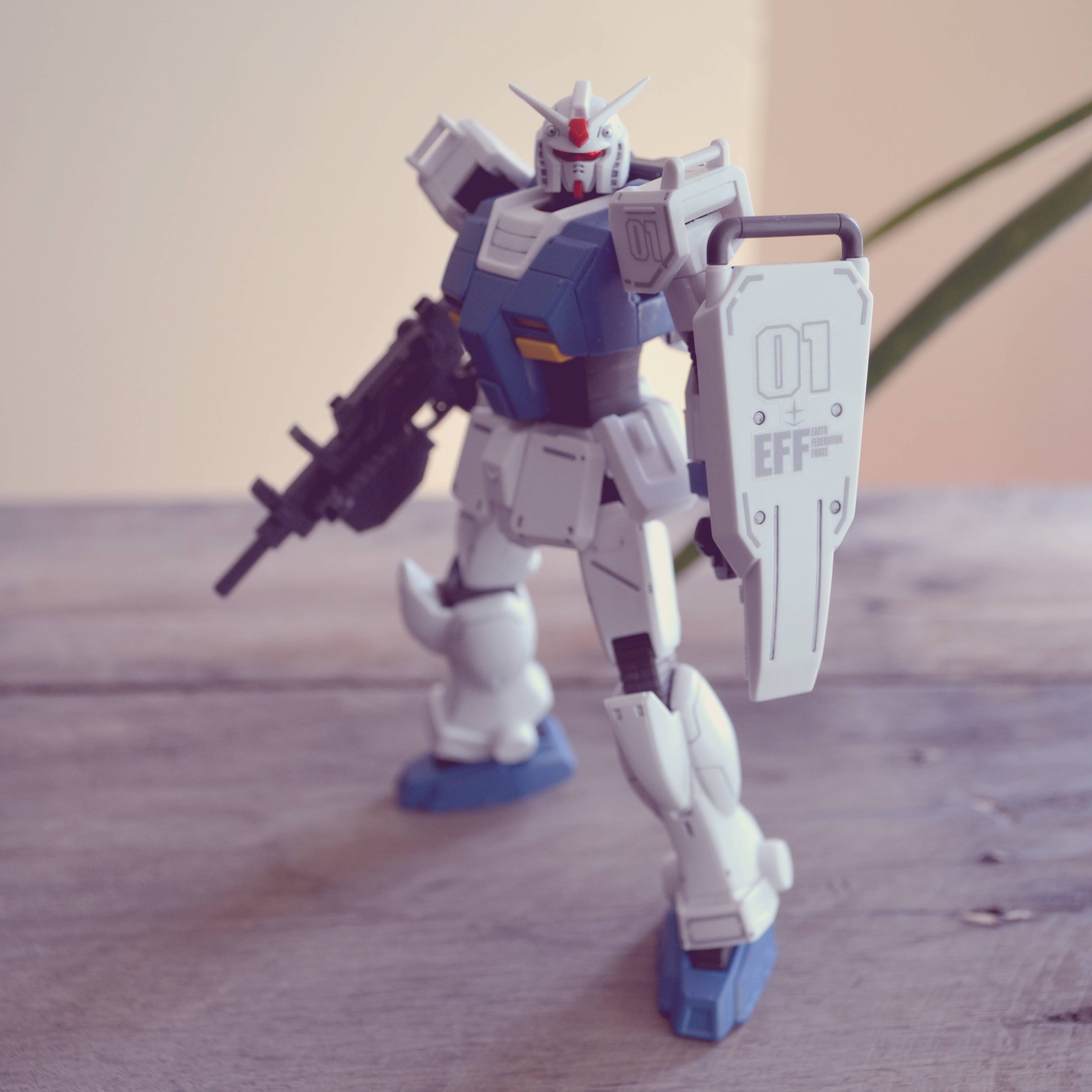 Overall, the suit is well made and looks great. I was, at first, slightly put off by the amount of white in the suit, but with the accents of gray via stickers, the suit looks a lot better. Basically, with a little work, this suit has the potential to be amazing.
Housekeeping
Hey readers, it seems the common theme of this year has been apology after apology for delays. I guess the hobby life was never an easy one for a working man. I have not touched paints in months and so many of the kits I've been excited for simply do not get purchased. However, I have not given up on making time for this hobby! There are a few projects still on my mind and I will hopefully allot enough time to get to them before 2016 ends.
In the mean time, I finally made the photography upgrade I've needed since..well, since I started a decade ago. With a friend's upgrade to the Nikon D7100, I had the privilege to buy her slightly used predecessor, the Nikon D3100.

In the photo set above, I tried to carry on the joke that the Local Type is the Gundam of hipsters. Reclaimed wood and lame filters aside, I attempted to shoot in natural light rather than the sterile setting of a light box. I hope to continue to experiment with this DSLR and see what interesting shots I can get with my Gunpla (along with whatever else I shoot). There's still a lot to learn about the Nikon so I hope to be able to share my progress as I continue both hobbies. Thanks for reading and I hope to see you here in the next one!
Posted by Unknown at 10:09 PM