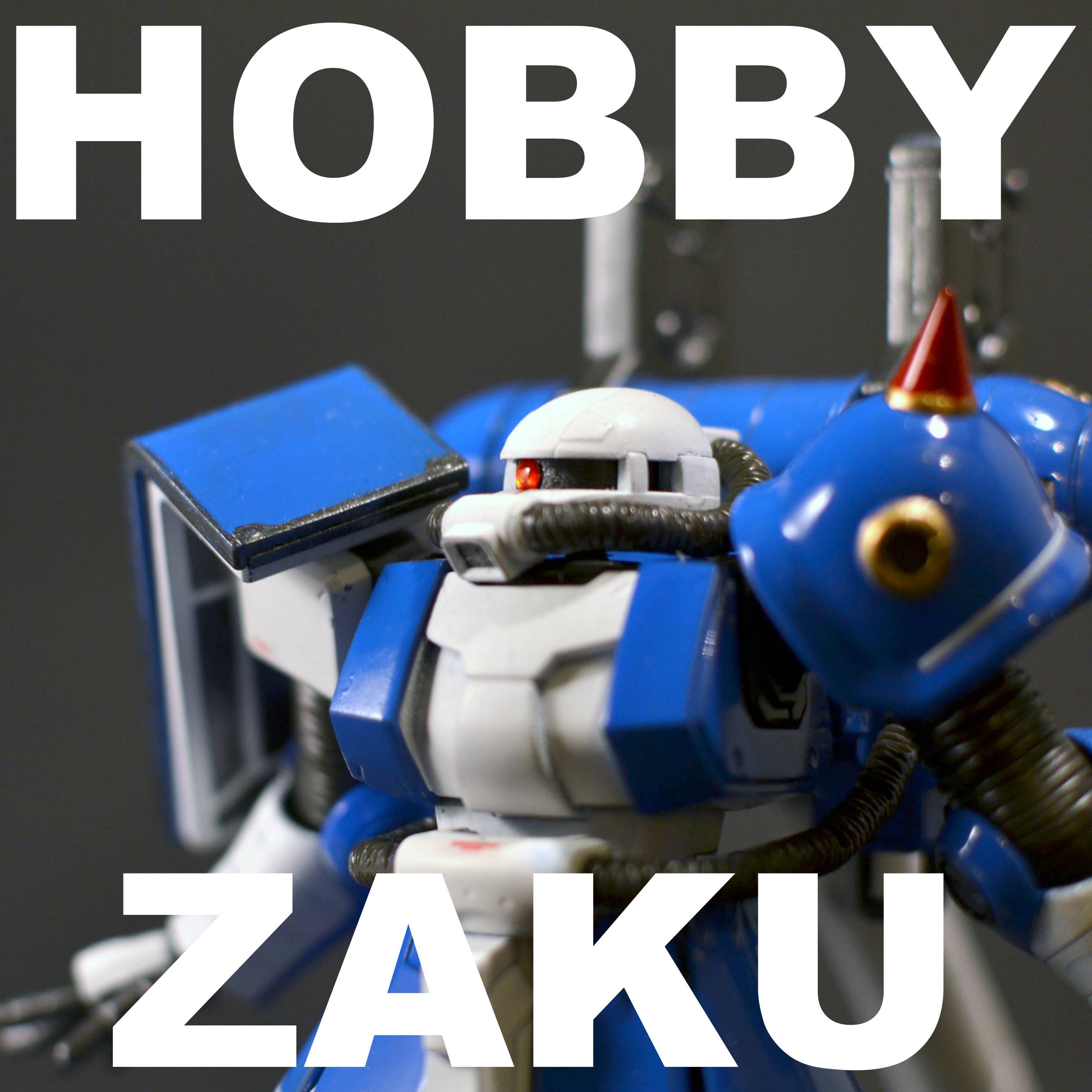 Kicking Off
At the beginning of 2017, /u/soximent takes the lead in organizing a group build on /r/gunpla. At the time I was in the middle of two projects -- both of which I had to put on hold for different reasons (I'm sure I'll get back to them soon). Since I had a Zaku II from the Big Gun kit (for yet another project), I decided it would be a good place to use what would have been an extra suit.

Concept
While snap building this kit on an impromptu Twitch stream, I thought about what I could aim for in this kit (partially aloud to the 2-5 person audience). Two ideas stood above the rest, 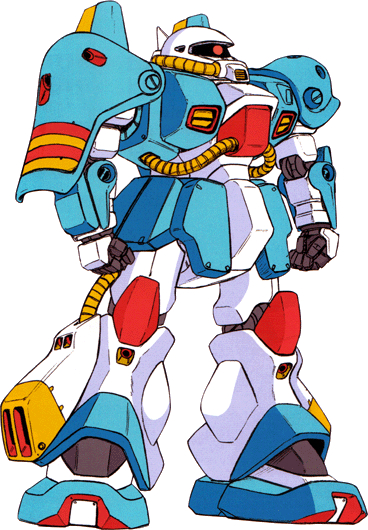 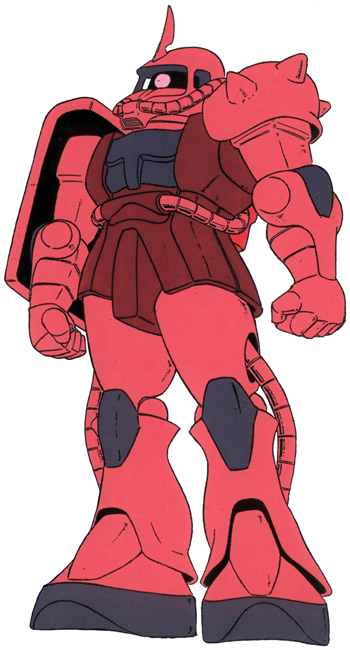 Needless to say, I chose the Hobby Zaku concept. I started thinking about General Aviation, trainer aircraft, and the like. Though I would try to stick with the color scheme of the Hobby Hizack, I also thought about what kind of twist I could put into the kit.
Let it be known that the reason had nothing to do with the fact that I would not have to work on any weapons.

Background: Hobby Hizack
The Hobby Hizack first appears in Mobile Suit Gundam: Char's Coutnerattack as a...well...hobby vehicle. By 0093, the Hizack had become an obsolete war machine, so it was stripped of its weapons and sold for civilian use. 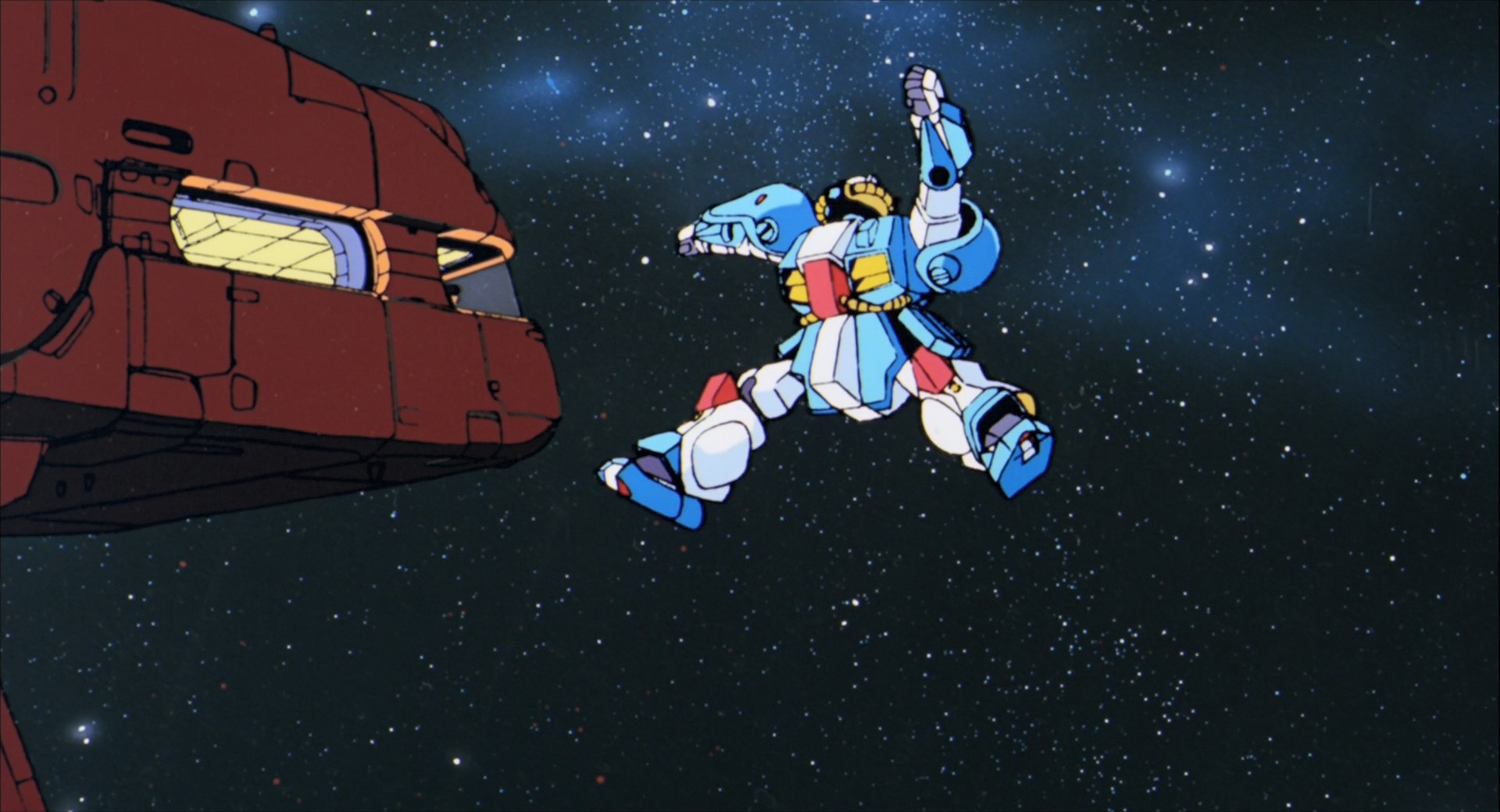 In the movie, we can see Quess pilot the Hobby Hizack like an acrobat in front of many military brass, including Char himself. If only this spawned choreographed mobile suit demonstrations like the Thunderbirds or Blue Angels. That might be an idea for a future project (no! no! no! you have too many half-finished projects!). 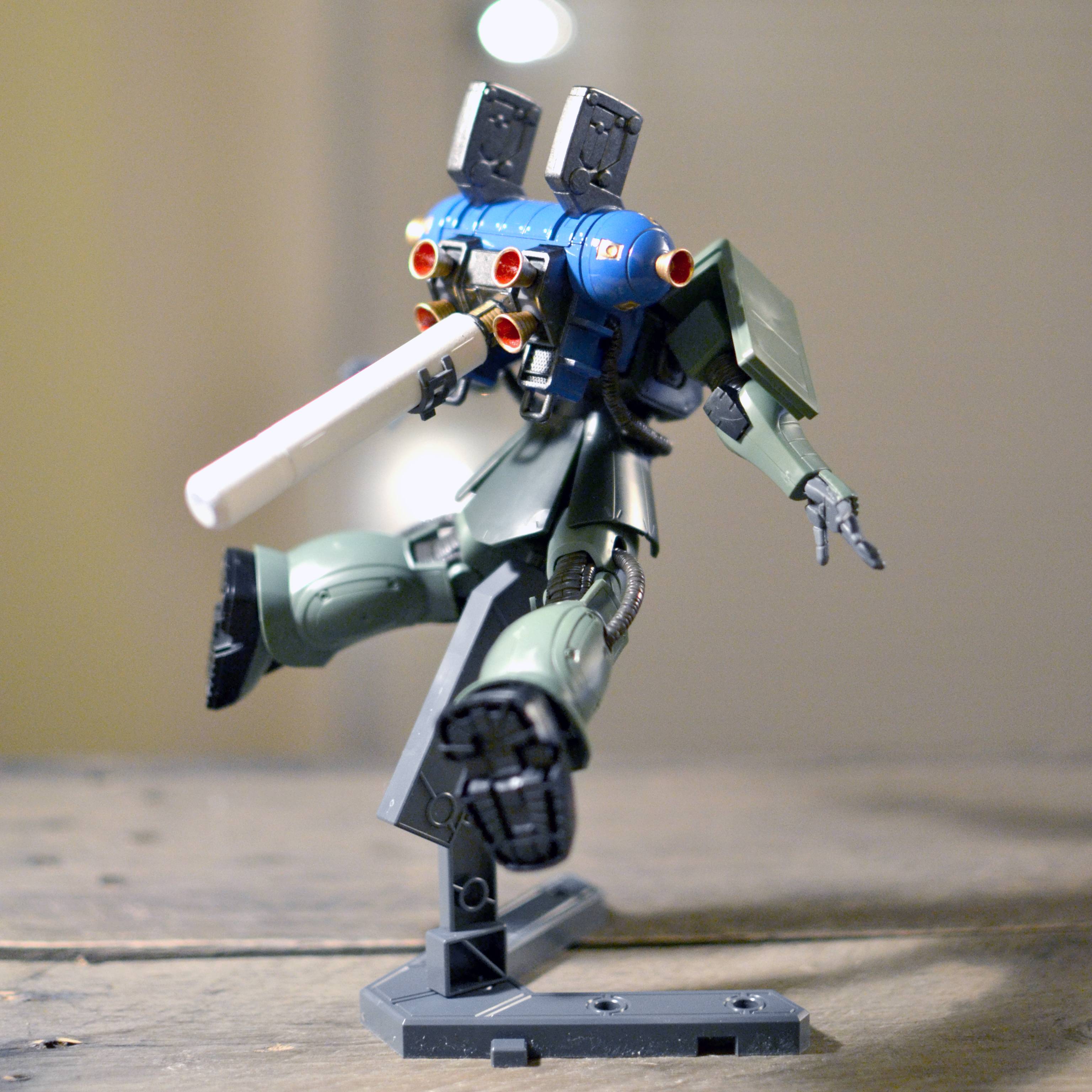 To keep the color scheme interesting, I did not follow the color scheme of the Hizack (which involves coloring the whole back blue with little to no color separation). Instead, I painted the parts involving the thrusters, among other details, Tamiya's Gunmetal. The Thrusters, instead of the gray/red look, I went for the Thunderbolt gold and red by spraying the inside with gloss red from RustOleum, and painting Mr. Color Gold on the exterior. After removing as much seam line as possible, I finished off by spraying the tank flat white and detailing the stem/connection point a combination of gold and gunmetal. Once the piece of generally dried, I thought the test was successful and proceeded to the rest of the kit.

One part I am proud of (and, as you will see, sad for) is the shoulder-mounted armor plate. The red and yellow stripe is not perfect (like most things on this build), but the way it turned out conceptually had me excited to finish the rest of the build. If I had more time on the kit, I probably would have tried to add a similar yellow and red stripe spanning length of the opposite leg. 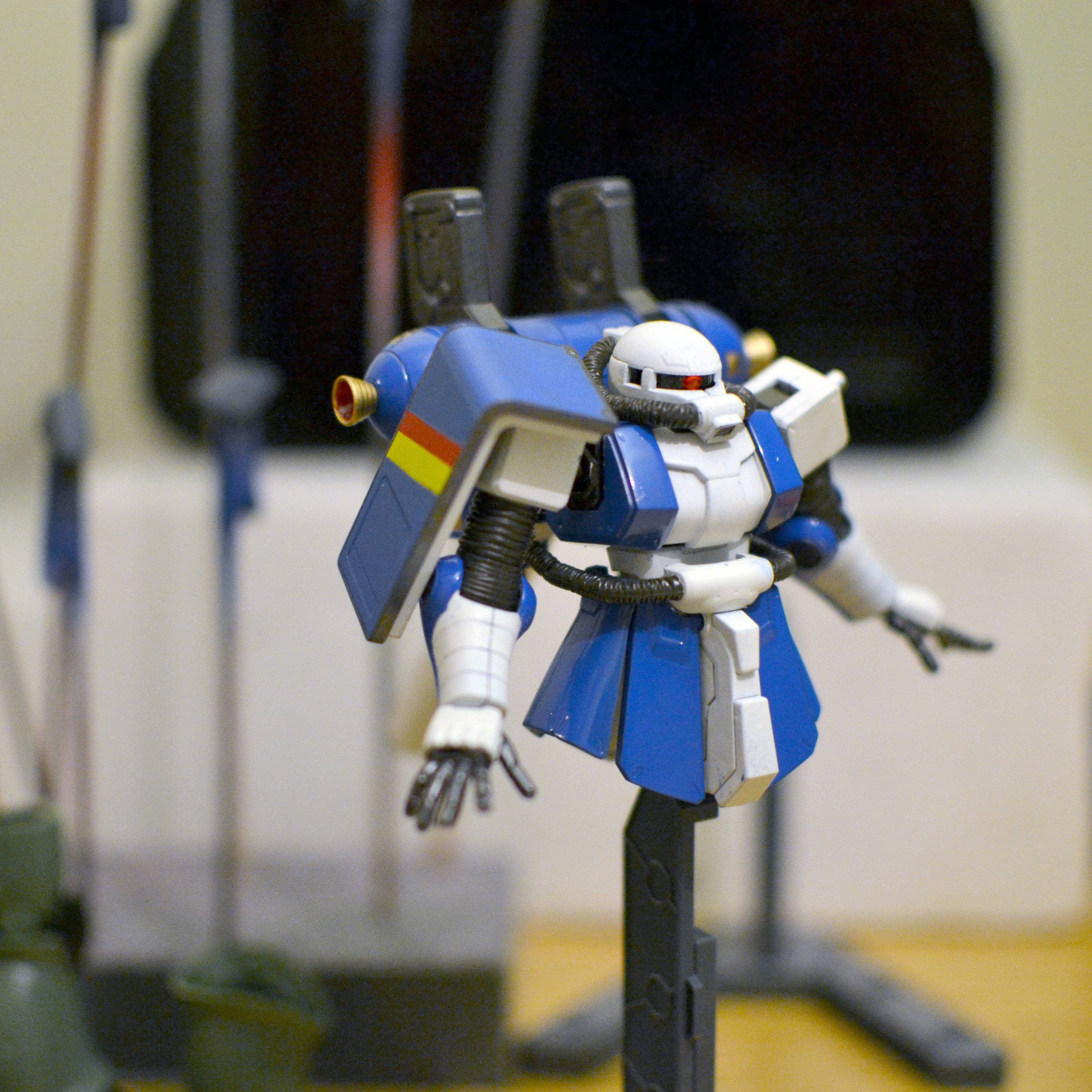 Other than the shoulder, most of the painting went smoothly. Other than the calves and spiked shoulder, no glue was used to remove seam lines. Because of this painting involved spraying ro hand painting parts separately, making the job easier.
The major issue in this phase ended up being the arms. Because the parts are generally two half-shells, color separation involved masking. Not only are the seam lines highly visible, the paint job is well under par. Needless to say, I'm not proud of that work.

Like most Gunpla kits, the Zaku II (Thunderbolt Ver.) lacks the essential play option of hands. For a suit that will not be carrying any weapons, I wanted the open hand option. None were provided -- not even the open left hand for carrying a rifle stock was provided. To remedy the issue, I purchased the Jigen Knuckles (Round), shaved down the top until I could crudely fit the Zaku armor plate on top of the hands, and painted the piece white and gunmetal. Despite some flaws, I was pretty happy with the result.
Furthermore, most Zaku kits will include a pink sticker for the monoeye. It looks cheap, it is cheap. I hate it. To fix this, I used a set of lens stickers from CJ Hobby that a friend had given me. Backed with a silver sticker cut to size, I painted the surface of the sticker with a tiny bit of Tamiya clear red to get the final product.

Crunch Time! The Final Days
From straight build to the previous photo, I took a little over a week. It took me until maybe 2 days before the end of the month to figure out what I wanted to do with the shoulder. I liked the spikes, but it wasn't very "Hobby-Hizack-like." To compromise, I cut off the side spikes and left the top spike for the final result. 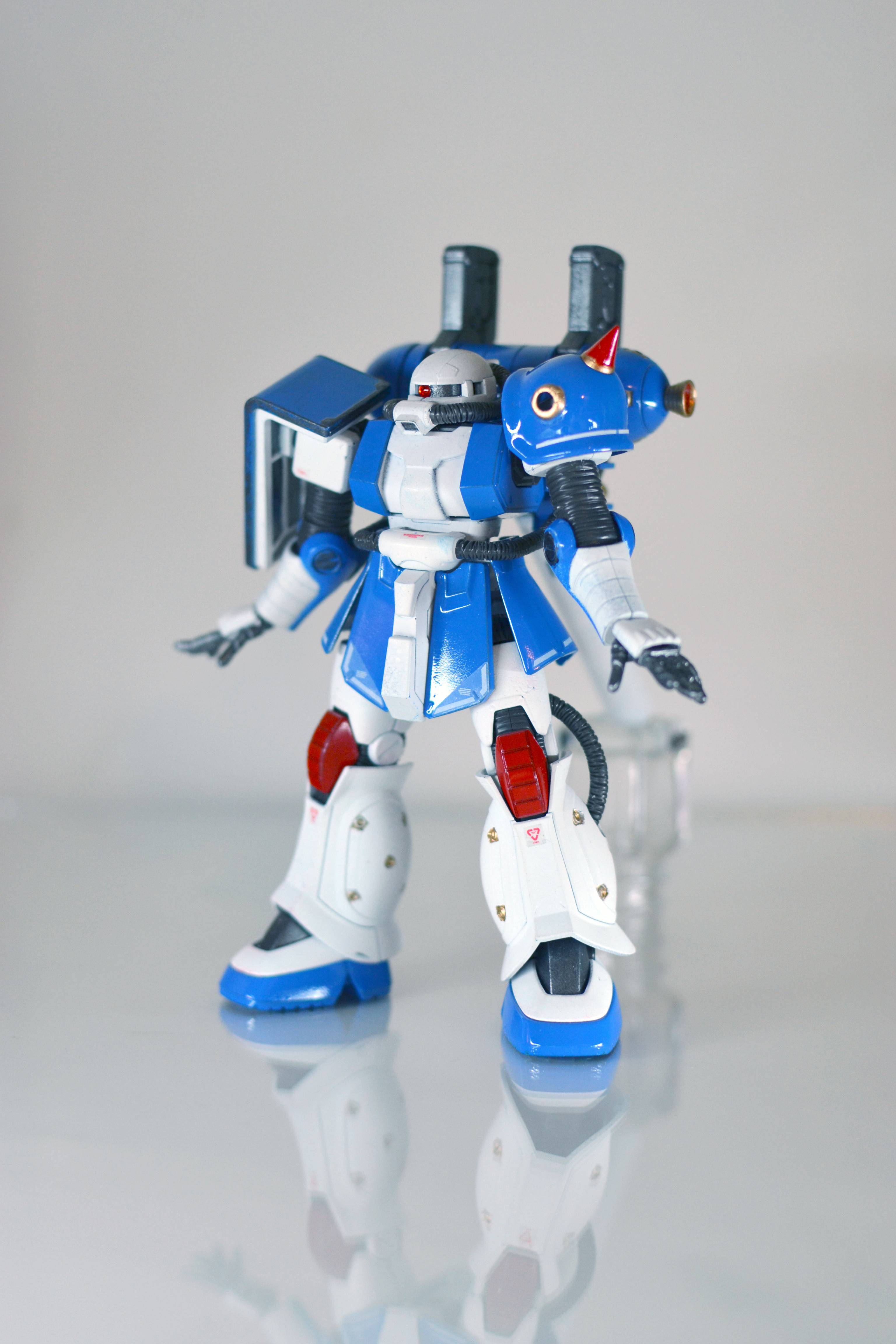 While I was letting the shoulder dry as best as possible, I took out some leftover decals and stickers from various kits and started adding some minor details to the kit. Unfortunately, some stickers are very obvious on gloss surfaces. 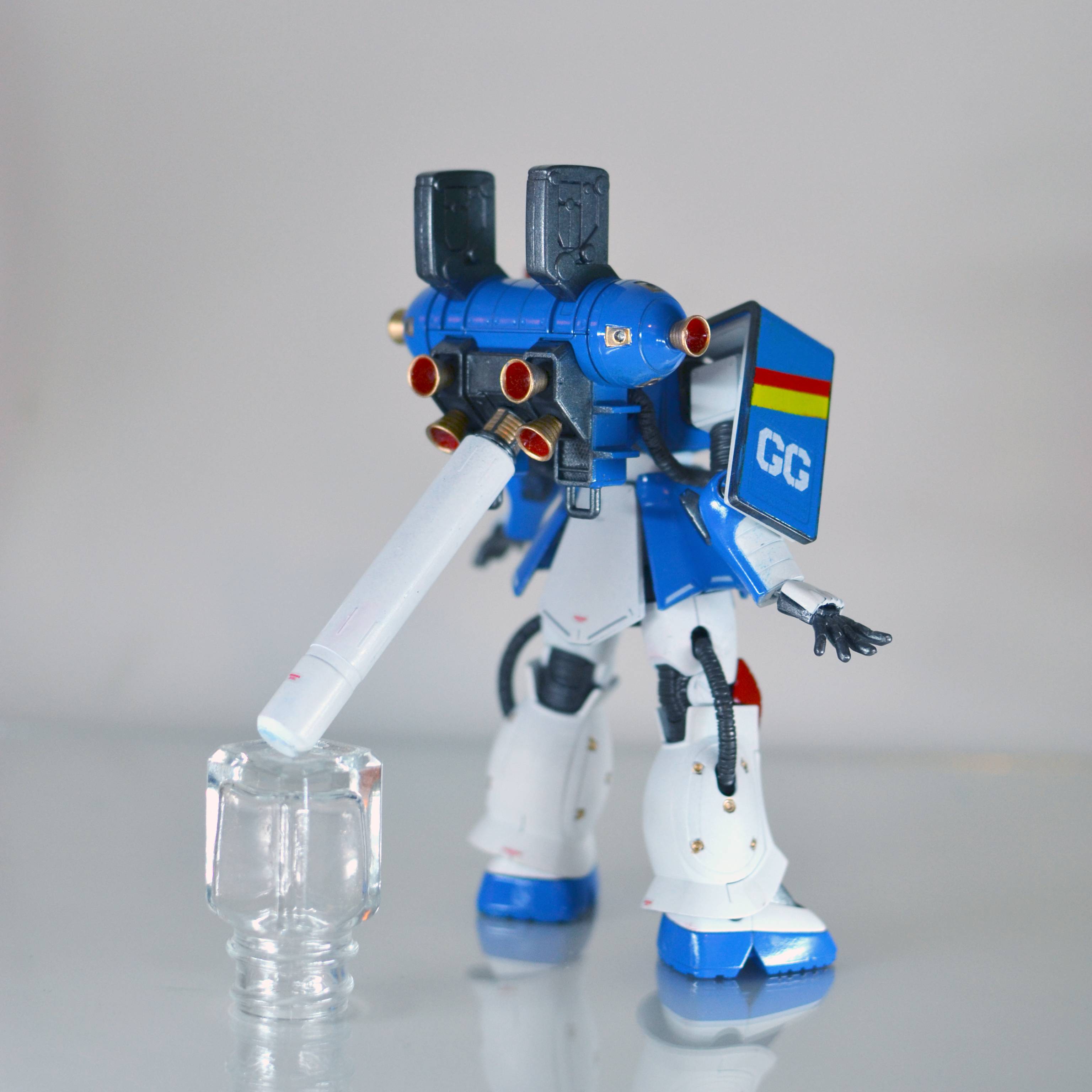 At this point, I was not completely satisfied, but I was finished -- time was up. January had come to a close.

Faults
With the build time frame set to one month (not to mention my sloppy craftsmanship), many mistakes were made. A lot of the detail work could have been tighter, some scratches and fingerprints in the paint could have been avoided, but the biggest faults of this build lie in two locations: the shoulder armor and the right foot. 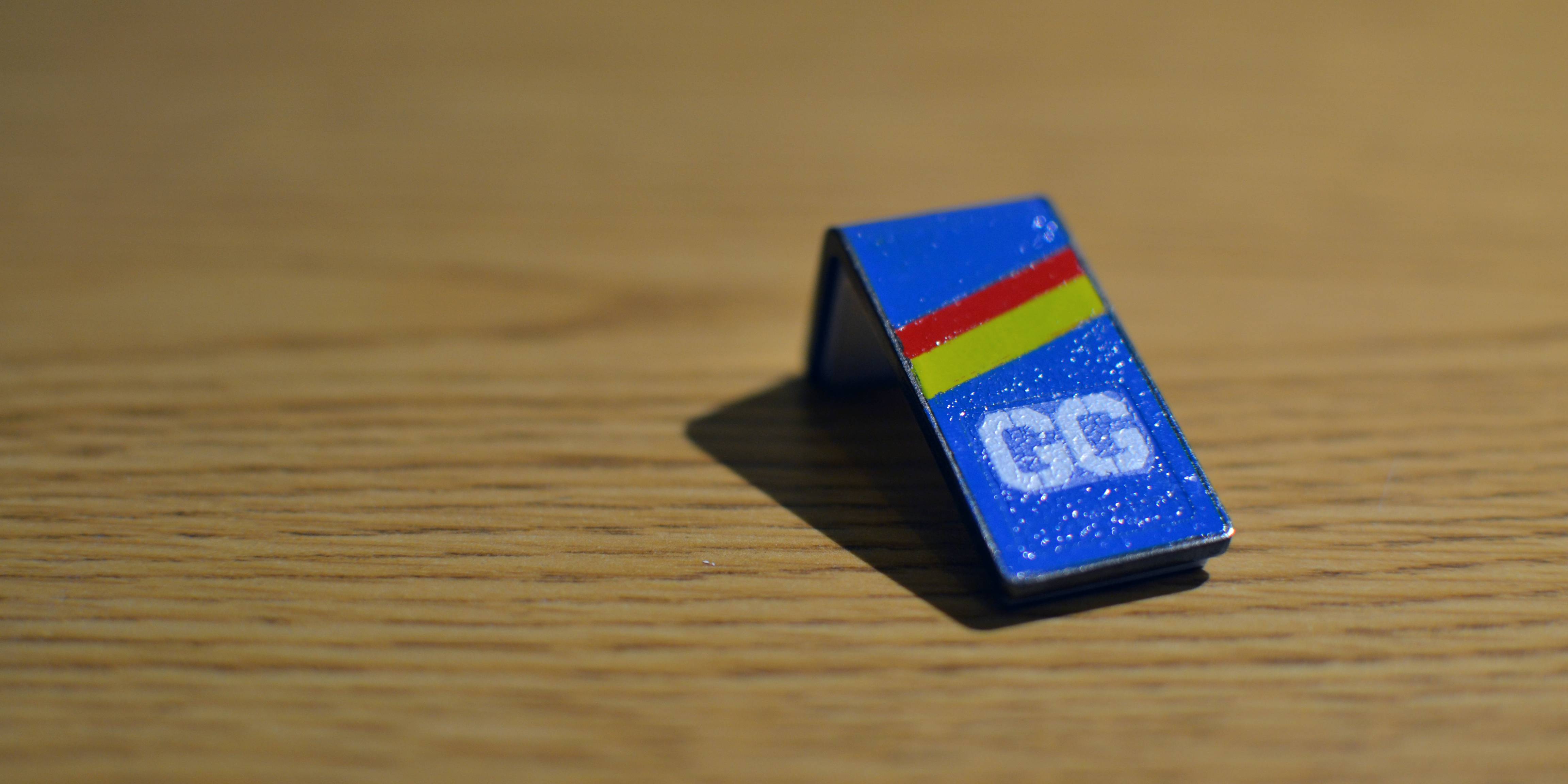 The right foot had since been repainted, so the final photographs will not show the mistake. However, if you look at some of the WIP photos, you will notice a strange looking right foot with what looks like mustard (I'll let you find it). I wanted to add a little color separation to the foot to imitate the white/red recessed tip of the Hobby Hizack. Instead of white or red, I wanted to add a little more yellow to the kit, so I masked off the top part and sprayed the polycarbonate yellow, the same yellow used on the armor stripe. The blue reacted to this paint and started warping, causing the foot to look like it had stepped in a puddle of mustard instead of a yellow soled shoe. To remedy the foot, a day before the due date, I scraped off and sanded the piece and repainted it. If you look closely, the right foot does not have the same defining edge of the left foot. The gloss blue had glazed over any detail that used to exist.
As for the shoulder armor, the piece looked pretty satisfactory on the first try. However, I wanted to add a gloss top coat before adding a wetslide decal (the 'GG'). Unfortunately, despite weeks of letting the paint dry, the RustOleum gloss enamel lifted the gloss blue enamel right up. I should have foreseen this, but in a lapse of judgement, I ruined a perfectly OK paint job. Unfortunately, with time running out, I was not able to repair this issue and decided to put the decal on anyway. In certain photos, the shoulder does not look so bad, but in the right light, you can see the full extent of the damage.

Going Back
I considered going back and "completing" the suit by cleaning up some of the paint (re-doing the shoulder) and adding in some panel lining, but I decided to just keep the suit the way it was. It is a suit completed within a month, it was the suit that I submitted to r/gunpla. I'm sure there will be other group builds and custom projects I'll be working on soon enough.

Thanks for reading! Until next time, may your cuts be clean and sandpaper rough. 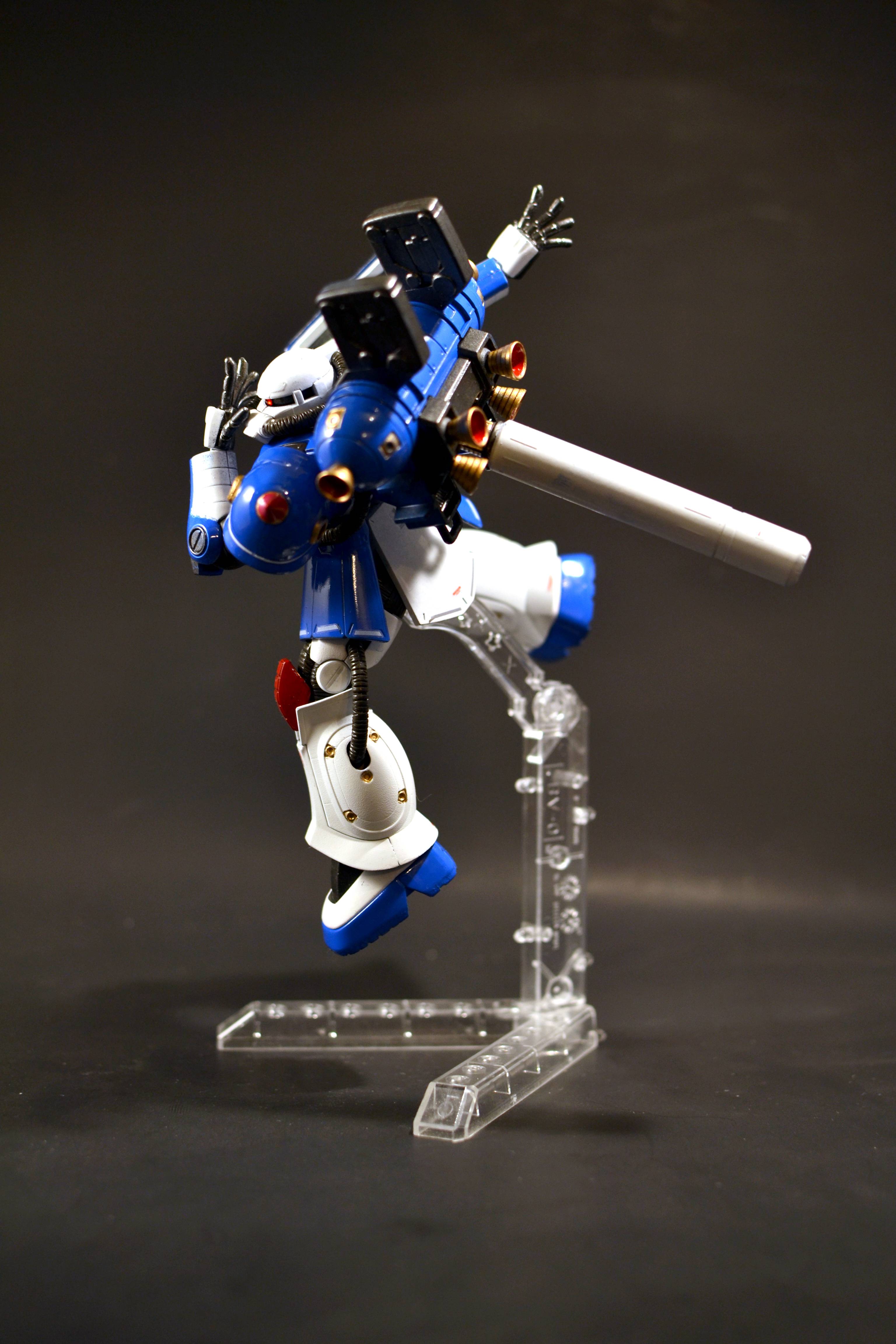