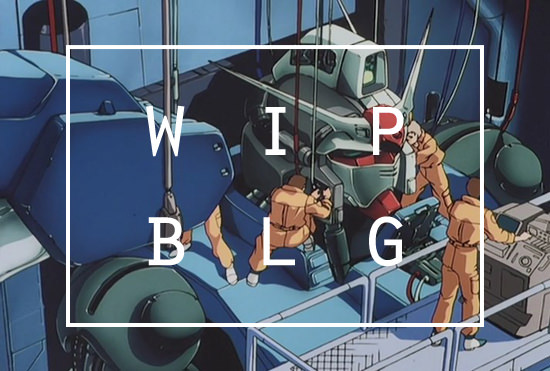 I have been stuck in 2014. Aesthetically, I created a set of sub-par banners, graphics and logos, slapped it on Blogger, tweaked the settings to my personal taste, whether it was practical or not, and called it Gundariumsmith. Though I've been satisfied with the design, I know I can do better. Plus the site could use a face lift as we come close to the fourth year of this blog (has it really been four?). In this article, I wanted to highlight the changes that have been made, the reason for the changes, and future (dream) changes to come. I apologize if you clicked on this post looking for Gunpla. There probably won't be much for you here (check out my stuff in the menu above!).

The most obvious changes will be the background and banner. Those are can be seen universally. I originally had a tile of grainy gray squares. Overall the blog had a grain heavy aesthetic because I wanted to have a sort of television grain theme. If I got into the reviews enough, I wanted to start doing video reviews in a sort of VHS aesthetic (if anyone remembers the "Why I Hate Money" cringe-bomb series). Though I still like the idea, I think I unintentionally moved away from the aesthetic over the years as my taste slowly evolves.

To replace the backdrop, I have a long exposure of the New Hampshire night sky in late summer -- cropped, duplicated, rotated, and tweaked to be tiled -- hopefully you can't find the seams too easily. I like the darker background, though I'm not sure if the star sky helps or hurts the overall theme, especially since I used the image in multiple places. I'll have to test it out for awhile.

The next change is also quite universal -- the sidebar. I originally had the google+ profile links on the top. Over the years I've grown to detest these logos, not because it's g+ (though that has another can of worms), but because the objects themselves were slow to load and quite rigid in design. Since I barely use the platform, I decided it'd be best to remove it all together. Instead, I have the latest builds right at the top, followed by a link to my Instagram as a shameless plug to a platform I frequent more often than anything else I currently use (seriously, if you're even remotely interested in what I do, please follow me!). The other banners currently remain the same, though I should probably look into remaking them in the near future.

The last two changes are probably the most significant -- the pages. The About section had not been changed since I started the blog, and Gundariumsmith had a format that was not only hard to follow, but hard to upkeep. I needed to change these badly if I wanted to

In the About section, I had a section that read,

You will find nothing special on this blog: just an account of an average guy, and his wishful thoughts, trying to put the pieces together. Updates are sparse with little content, and modeling skills are mediocre at best. Photography is done with an average point and shoot camera in a DIY light box.

Though part of that is true, I have grown as a photographer -- my equipment is not as basic as it once was. Though no one probably reads the About section, I should have changed this at least a year ago. As for the Gundariumsmith section I mentioned I stopped Quick Reviews this year. Because of this, I wanted to downplay the OOB kits by removing the banners, then highlighting the significant work year by year. Inspired by my brother's page update in 2016, I made some changes of my own. 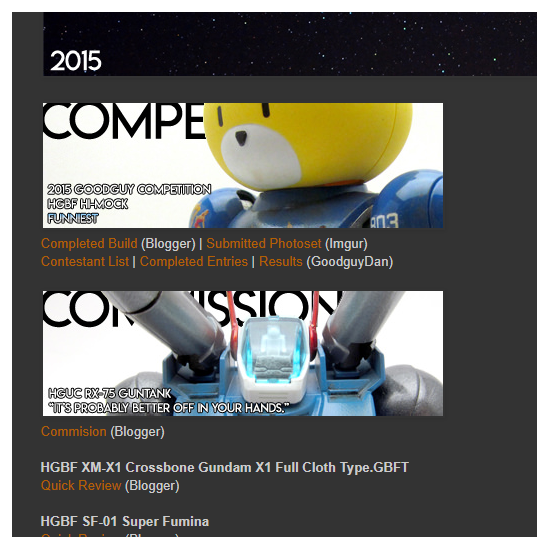 With these changes, I hope the blog will be easier for you, the reader, to go through the content. I still have a lot of improvements to make in the writing of the articles themselves, but hopefully I can get there one step at a time -- this is just a work in progress.

Thank you for taking the time to read this update. If you have the time, please let me know what you think of the changes!
Posted by Unknown at 10:57 PM